Pittsburgh, PA (November 5, 2018) Editorial — What were members of the Pittsburgh police doing drinking in a South Side bar before fighting four men, all allegedly members of the Pagans motorcycle club, earlier last month? And why are the police stonewalling the district attorney’s office as the city attempts to figure out what led to that drunken melee?

These are the questions that must be answered as serious questions have been raised about the official police account surrounding the recent brawl. 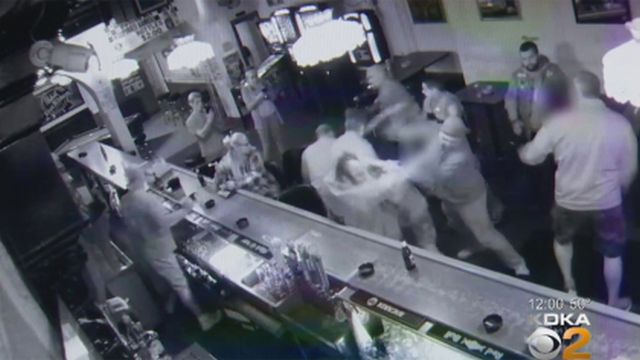 Video still of bar fight with the Pagans MC and undercover police on October 13, 2018

The Oct. 13 dust up was ostensibly the result of a drug dealing sting gone awry. According to the police, the undercover officers had their covers blown before a Pagan allegedly started pushing and throwing punches. The officers claimed the use of force was necessary for bringing down the unruly men.

All told, four alleged Pagans were arrested and charged with aggravated assault, conspiracy and causing a riot.

Surveillance cameras inside the bar captured officers drinking heavily for about five hours before the confrontation. Attorney Martin A. Dietz, who represents 28-year-old Erik Heitzenrater, estimated that some of the detectives had as many as 15 drinks, usually doubles and triples on the rocks.

The officers then verbally sparred with the alleged Pagans. One detective raised his shirt to display his firearm. More words were exchanged, then pushing, then fisticuffs.

After the fight broke out, video captured one defendant, 36-year-old Frank Deluca, being pinned against the bar by one officer as another struck Mr. Deluca in the head 19 times. Mr. Deluca was hospitalized with two black eyes, one of which was swollen shut, and bruising on his forehead.

Another alleged Pagan can be seen getting punched by an officer despite standing away from the scuffle. The officer then kicks that same man on the ground.

It is clear there are significant questions to be answered about this operation. But the police have not seemed too eager to answer them.

On Oct. 25, Allegheny County District Attorney Stephen A. Zappala Jr. publicly questioned why the police have not been forthcoming with evidence and statements about the brawl.

Not enough evidence against the Pagans MC

Mr. Zappala said that, as of this writing, he does not have enough evidence to prosecute any of the accused Pagans. He also stated that the police have not informed if the officers were actually undercover or on an assignment in the bar.

Are officers permitted to drink on the job? What latitude is afforded to undercover officers on assignment? What is the evidence supporting the charges facing the four alleged Pagans?

Mr. Zappala is right to criticize the department for its obfuscation, an approach he has effectively used in the past. The people of Pittsburgh need to know that their police officers are comporting themselves in a respectful manner and that the department will provide transparency and accountability. They deserve answers.