Leeds, West Yorkshire (January 30, 2019) BTN – Leeds Crown Court heard the defendants were wearing “motorcycle club attire” when they turned up at the house and began “shouting and bawling” and making threats.  Howard Shaw, prosecuting, said the complainant - known as ‘Spike’ - had previously been a member of the Blue Angels until leaving the club in 2015. 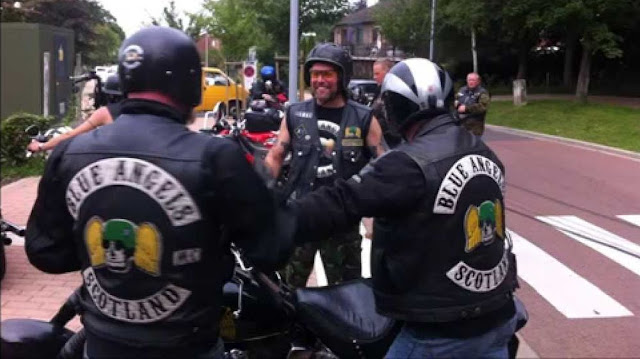 Explaining the background to the incident on July 27 last year, the prosecutor said: “It appears some kind of falling out went on and he was warned in 2015 not to associate with any motorcycle club ever again and, according to the complainant, was assaulted.” Mr Shaw said the man then joined the rival Mongrel Mob club. He added: “He claims to have been high up within the ranks of the club, becoming the European Secretary.”

The court heard the four men turned up outside the property in Beeston around 9.30pm in a Nissan Navara while the man was at his home with family and friends. Mr Shaw said: “The four defendants were wearing motorcycle club attire and then engaged in shouting, bawling, threats and finger pointing. “They did not enter the garden but their conduct was such that the complainant threw out, from the first floor window, his motorcycle jacket which had the insignia of his own club. “With that, the defendants left and drove off.”

Mr Shaw said the man only contacted police because there was “an unwritten rule” among motorcycle clubs that no such visits would be paid to members’ homes when family were present. All four men were arrested and refused to comment. They were later identified at an identification procedure. The men were initially charged with robbery.

The complainant refused to attend court to give evidence against when they were due to go on trial on Monday The defendants pleaded guilty to threatening behaviour and were made the subject of 12-month community orders.

Recorder Richard Thyne said: “The offence is aggravated on any view by the fact that it was planned, you were in a group, there was a history of bad feeling and it was in a residential street at night. “Each of you in the past has been capable of serious criminality and your conduct on that evening has to be viewed in that context.”

Those sentenced were: David Hansbury, 49, of Midland Road, Hyde Park, Leeds.
He was made the subject of a two-month electronically-tagged curfew order. Hansbury has previous convictions for robbery, affray and firearms offences.

David Torr, 55, of Miles Hill Avenue, Scott Hall, Leeds. Ordered to do 40 hours of unpaid work. He has convictions for robbery, assault and possession of an offensive weapon.

Steven Clayton, 59, of Meadow Road, Bradford, Ordered to do 45 hours of unpaid work. He has convictions for affray, wounding and possession of an offensive weapon.

Martin Booth, 48, of Crook Farm Caravan Park, Shipley. Ordered to do 45 hours of unpaid work. Booth has previous convictions for possession of a prohibited firearm.