Waco, Texas (January 12, 2019) BTN – The 18-year-old was driving his flashy new Dodge Charger through a Waco suburban community when he saw the unmistakable lights of a police car behind him. He was nervous as he pulled over because he had a little weed on him. The officer was aggressive, and the man’s small marijuana stash quickly was discovered. The officer asked him about his shiny ride.

More specifically, the officer asked if the Charger was paid for, a clear sign to the young man’s lawyer that the officer was searching for a way to bump what otherwise would have been a minor infraction up to a felony. After learning the car indeed was paid for, the officer charged the man with possession of marijuana with intent to deliver in a drug-free zone, despite the fact that he had far less than an ounce of marijuana for his personal use.

Waco attorney Cody Cleveland has had at least five clients who went through that or similar scenarios in at least two Waco suburbs in the past five years. He declined to identify the cities.

“Cops are very aware of the civil asset forfeiture law,” Cleveland said. “It’s not that common, but there are a few officers in my experience who would do everything he could to get his hands on your car or motorcycle, especially if they knew it was paid off. They want assets that are free and clear so they can turn around and auction them off, but they can’t do that unless it’s a felony.

“I have had what I consider some pretty damn shady experiences with local law enforcement in that regard,” Cleveland said. “I’m like most people. I don’t want to see an abuse of the law. I don’t want a law enforcement officer to just make a criminal case so they can line their pockets, so to speak, for financial gain.”

Law enforcement agencies support civil asset forfeiture and see it as a valuable weapon by turning criminals’ ill-gotten gains against them to fight crime. Police agencies can seize cash, cars, boats, motorcycles, planes and other items in civil lawsuits if they can prove the items were obtained through illicit means, such as dealing drugs.

However, headline-grabbing abuses of the forfeiture system in recent years have prompted legislative attempts to curb the practice, though they have not succeeded. Also, a pending U.S. Supreme Court case could have a major impact on law enforcement’s ability to turn the proceeds of crime into crime-fighting cash through the forfeiture process.

“They did right by my client,” Cleveland said. “It didn’t take a lot of tooth-pulling. They said they were not playing that game and they released the car back to him. The DA’s office is supposed to be the gatekeeper, and so far, they have been pretty reasonable.”

In civil asset forfeiture cases, police agencies team with prosecutors’ offices, who file the lawsuits and then split the proceeds with the agencies after judgments are entered.

Last year in Texas, law enforcement agencies and DA offices forfeited more than $50 million in cash, vehicles and other property allegedly linked to crime, according to a report by the Texas Tribune. That includes property under both criminal and civil forfeitures. Criminal forfeitures require a conviction before assets can be taken. Civil forfeiture cases do not.

Cleveland’s experiences with the local DA’s office were under District Attorney Abel Reyna. Reyna was replaced this month by Barry Johnson. Tom Needham, Johnson’s executive district attorney, said Johnson has just started his tenure and has not had a chance to review office policies for civil asset forfeitures.

“At this point, we have just gotten into office and have not yet reviewed current policies and procedures for civil forfeitures, but we will be doing so and will ensure that they are being handled in the manner intended in the statute to promote justice.”

In the past four years under the Reyna administration, the DA’s office has averaged seizing about $250,000 in cash and property annually, according to records kept by the county auditor’s office. The DA’s office forfeiture fund balance in that time period has averaged about $550,000, and Reyna averaged spending about $100,000 each year using proceeds from the fund.

During the time period, an average of 75 vehicles a year were seized with the intent to sell them at auction and use the proceeds for law enforcement, or in some cases, use the vehicles for police duties. 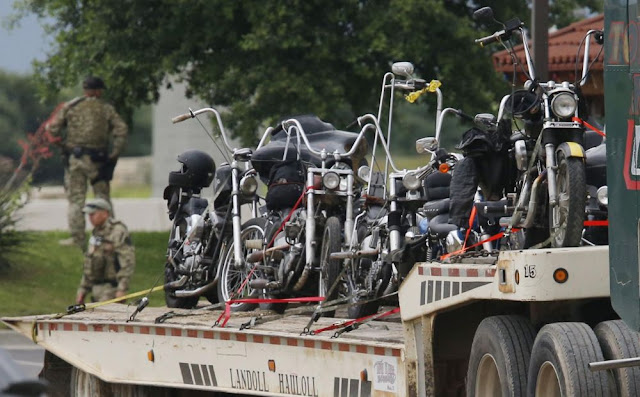 After the 2015 biker ambush by law enforcement at Twin Peaks in Waco, Reyna orchestrated the arrests of about 200 bikers, sought indictments against 155 of them and filed civil forfeiture proceedings against 16 motorcycles, eight pickups and two SUVs.

During that time, some of the bikes and vehicles were returned to their owners, while others were repossessed after lien holders learned the vehicles were at Twin Peaks.

Dallas attorney Brian Bouffard represented Jorge Salinas in the Twin Peaks case. Salinas, a Cossack from Lometa, walked away from his motorcycle, an older model, after it was seized because it was too expensive and too much trouble to try to get it back, Bouffard said.

Bouffard called the seizures in the Twin Peaks cases a “prime example” that reform is needed.

“The civil asset forfeiture program is about the most unconstitutional thing I can imagine,” he said. “The government can take all your stuff on a mere allegation of misconduct. In my opinion, there is no good argument to be made for the idea that just because someone is accused of a crime that the government ought to be able to steal their property.

“I think the legislative intent was to allow it to happen only on a conviction. I still have a problem with that, but I have much less of a problem with that than the way things are now. It has been nothing more than a cash grab for counties. Apparently, they don’t make enough money fleecing citizens with traffic tickets. They also have to take their property merely by a police officer thinking something happened.”

“It’s an unbelievable tool for law enforcement,” McNamara said. “We are very mindful that there have been abuses, but we are very careful to follow the letter of the law on this. The best way of stripping drug dealers of their power is you hit them in the pocketbook. It is a way of hitting the drug dealer below the belt.”

McNamara said his department has used seized funds to buy a $50,000 search and rescue boat, to pay for training and important life-saving vests for his deputies and to upgrade other equipment.

“We use that boat to search for bodies, and it didn’t cost the county taxpayers a dime,” McNamara said. “We are very conscious of that. We are very serious about keeping the taxpayers from footing all the bills, and the forfeiture program is part of that effort.”

Holt said the police department has $236,145 in its state forfeiture account and $59,615 in its account from federal court forfeitures. The department has used those funds for travel and training for officers, office furniture, special body armor, radios and expenses related to its K-9 program.

“I certainly understand the criticism of what has been done in some locations,” Holt said. “But I don’t think it is right to use a shotgun approach to punish everybody because a few folks can’t follow the rules.

“I think it would probably be good if there was some clarification in the process that allowed you to wait for the criminal case to move forward or at least get a disposition. I think that would help potentially resolve some of the criticism of the process. But more than anything, people need to follow the rules of the programs.”

Notable cases that brought attention to the program, and brought lawsuits and calls for reform, include a district attorney in Southeast Texas who bought a margarita machine with seized assets, a former DA in the Hill Country who used the money to pay for a trip to Hawaii, and a South Texas DA who pleaded guilty to misusing funds to pay bonuses to three secretaries and $81,000 to himself.

Officers in Tenaha drew a negative spotlight after it was alleged they committed “highway robbery” by extorting cash from drivers, mostly minorities, by threatening to jail them or remove their children if they did not sign waivers allowing them to seize their property without court intervention.

“After that, they cut funding for task forces and they all shriveled up and went away,” Holt said. “I think that is the tendency of some lawmakers is that they try to make a simple answer to a complex question, and this issue can be resolved through clarification of the current statutes.”