Santa Ana, California, (January 11, 2019) BTN — A California jury decided Friday that the Mongols motorcycle club should be stripped of its trademarked logo in a first-of-its-kind verdict, federal prosecutors said. The jury in U.S. District Court in Santa Ana jury previously found Mongol Nation, the entity that owns the image of a Mongol warrior on a chopper, guilty of racketeering and conspiracy. 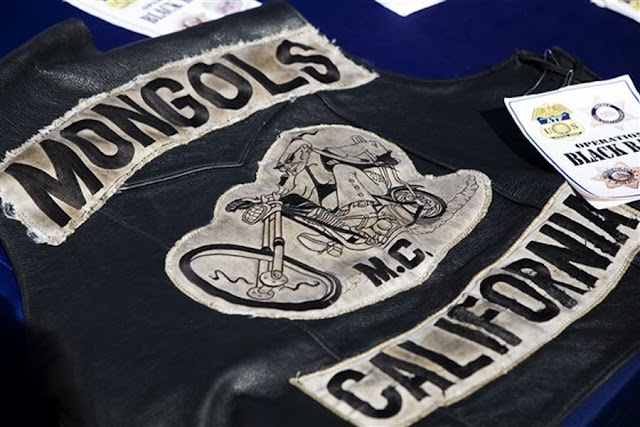 The verdict caps an unusual decade-long quest by prosecutors to dismantle the gang responsible for drug dealing and murder by seizing control of the trademark they said was core to the clubs's identity. Club members were "empowered by these symbols that they wear like armor," Assistant U.S. Attorney Steve Welk argued. Attorney Joseph Yanny had argued that the organization didn't tolerate criminal activity and kicked out bad members.

He said the government targeted the group because of its large Mexican-American population and had attributed crimes of some into a "group conviction." "These are ordinary people," Yanny said. "They are hardworking people. You don't see the Hells Angels here." But jurors found the Mongols were a criminal enterprise responsible for murder, attempted murder and drug dealing.

In addition to the logos, the jury found Friday that the government could keep various items bearing the mark, including vests, clothing and documents such as the Mongols’ constitution — as well as a number of guns, ammunition and armored vests it had seized in earlier raids against the group. But the jury denied forfeiture rights for belt buckles, jewelry, lighters, bandannas, stickers, and motorcycle parts — apparently unable to find the “required nexus” between the items and the group’s criminal activity. Friday’s verdict confounded Mongols members and their lawyers.

Stephen Stubbs, the club’s general counsel, described the outcome as “very strange” because the jury did not find the logo forfeitable on the count of racketeering, but did so on the racketeering conspiracy count. “How can we make sense out of that?” Mr. Stubbs said, adding that it appeared to be a compromise verdict, one agreed upon so the jury could go home after long days of deliberations. “So, we continue to fight so that Americans can’t be banned by the government from wearing symbols.”

The effort to take the logo followed the convictions of 77 club members on racketeering charges in 2008. The convictions were the result of an investigation in which four male agents with the Bureau of Alcohol, Tobacco, Firearms and Explosives infiltrated the club and four female agents posed as their girlfriends.