A Motorcycle Club can’t conspire with itself

Santa Ana, California  (December  5, 2018) BTN — A defense attorney for the Mongol Nation motorcycle club told a California jury Tuesday that federal prosecutors had not presented any evidence that the club ever violated racketeering laws or engaged in a conspiracy — indeed, he said, it could not be convicted of conspiracy because an entity cannot conspire with itself. 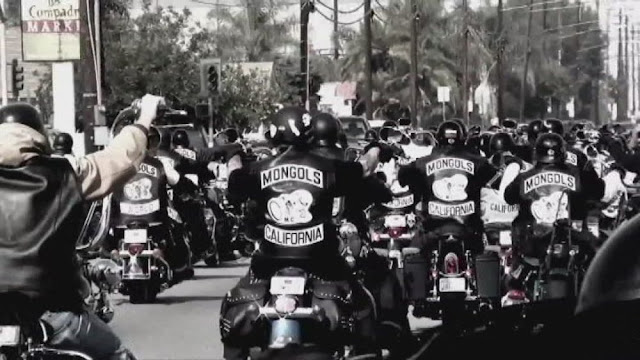 The Mongols MC are fighting the Feds for their trademarked logo

“There’s no evidence that the Mongol Nation conspired to do anything,” Joseph A. Yanny told the Orange County jury in his closing arguments.

“There are individual members” who have committed crimes, he acknowledged, but “there’s no evidence at all that the club joined in those activities.”

He said the club itself cannot be held liable for “isolated incidents committed by boneheads.”


Yanny described the prosecution of his client — which began with undercover investigations going back 20 years — as persecution of the largely Latino club by corrupt agents of the Bureau of Alcohol, Tobacco, Firearms and Explosives. He implored the jury to “send a message that this type of prosecution against these men has got to stop.”

Assistant U.S. Attorney Christopher M. Brunwin countered that the Mongol Nation as a body encourages and rewards crime. “They are a violent organization that attacks people, that kills people and that distributes drugs,” he said during rebuttal.

He said the Mongol Nation even rewards members who kill people on its behalf with special patches to sew onto their biker vests, including one he called a “murder patch.” It shows a skull-and-crossbones with a capital “M” on the skull’s forehead.

He scoffed at Yanny’s explanation that the M merely stands for Mongols.

They have not charged any individuals with crimes. As Yanny told the jury at the beginning of the trial, “No one is going to jail out of this trial.”

In a 2008 case, however, 79 Mongols and associates pleaded guilty to racketeering and other crimes.

A major goal of the current case is to seize, through criminal forfeiture, the clubs’s trademark to its distinctive main patch, which full members wear on the back of their vests. The design shows the word “Mongols” in an arc above what has been described as “a cartoonish depiction of a Genghis Khan-like character” riding a motorcycle and waving a sword.

If the prosecutors succeed, “no member of the club would be allowed to wear the trademark that we believe is synonymous with the group,” a representative of the U.S. Attorney’s Office has said.

Prosecutors are also seeking a fine and forfeiture of the club’s assets.

A significant but technical legal issue facing the jury is whether the Mongol Nation as an entity can be guilty of racketeering and conspiracy to engage in racketeering with itself. Under the federal RICO Act, a “person,” including a corporation or association, can be charged with a crime only for engaging racketeering activities with an “enterprise.”

Brunwin and Welk say that criminal enterprise is the larger Mongol biker club, of which the formal Mongol Nation is only a piece. At one point in the case, U.S. District Judge David O. Carter ruled that “there is no meaningful distinction” between the two, but he was reversed in July 2017 by the Ninth Circuit.

On Monday morning, Carter instructed the jury that prosecutors must prove the Mongol Nation and the Mongol club are distinct entities. The Mongol Nation cannot be guilty of racketeering, the judge said, if there is only one entity.

Therefore, Yanny later told the jury, “If you find that there is no distinction, we can all go home. You just find the defendant not guilty.” After all, he argued, “Where did you hear testimony that the Mongol Nation is separate from the Mongol club? I don’t remember any testimony like that during the government’s case.”

In his closing argument Monday, Welk argued that only Mongols who have risen through the ranks to earn the right to wear the complete insignia patch on their vests are members of the Mongol Nation. Citing the group’s detailed, written constitution, he said that other associates, prospects and “hang-arounds” are only part of the club but not “full-patch” Mongols.

Yanny scoffed at the distinction. “They’re all members; they’re just members with different degrees of rights and responsibilities,” he said. “They all pay dues,” and they all owe loyalty to the club. Although they can’t vote on club business, men in the process of earning a patch do attend the group’s meetings to assist the full-patch members by guarding the motorcycles and running errands.

Brunwin countered that the Mongol Nation is a legal person because it can, and does, own property, specifically its trademarks in the patch design. Other members of the broader club have no property interests in the trademarks, he said.

The prosecutor spent most of his rebuttal, however, recalling evidence of several violent crimes attributed to Mongols, including the murder of a Hells Angels leader in San Francisco, beatings and knifings of enemies or men they believed had insulted them, and a deadly brawl between a large number of Mongols and Hells Angels in Laughlin, Nev., in 2002.

“Is this an organization that conspires to commit murder?” Brunwin asked. “You bet it is, and you heard it over and over” from witnesses and from Mongols themselves in audio and video recordings played during the five-week trial.

He ended by recounting again for the jury the death of local police officer Shaun Diamond, allegedly killed when Mongol David Martinez fired a shotgun as police broke down Martinez’s door at 4 a.m. in October 2014 to serve a search warrant. A slug from the shotgun entered the back of Diamond’s head and came out through his mouth as his partner watched, Brunwin said.