Keremeos, B.C. (December 17, 2018) BTN — A new motorcycle club police say is affiliated with the Hells Angels has established itself around Fort Langley.

Members of the Street Reapers motorcycle club were reportedly spotted at the funeral of slain Hells Angel Chad Wilson in Maple Ridge on Saturday. 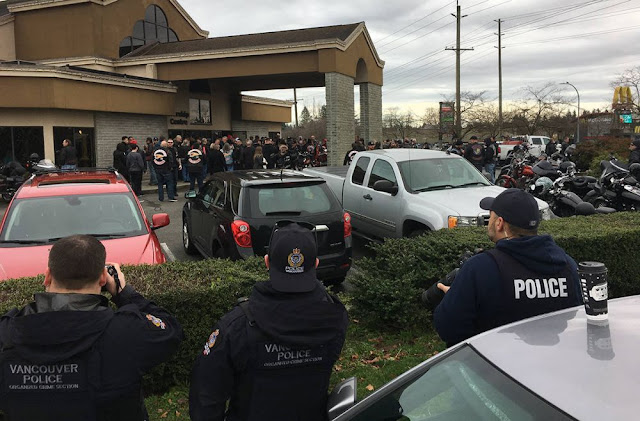 “The Street Reapers are actually a motorcycle club that are closely associated and have close ties to the Hardside chapter of the Hells Angels,” said Sgt. Brenda Winpenny, spokesperson for the Combined Forces Special Enforcement Unit (CFSEU), an anti-gang policing unit.

The Hardside Hells Angels chapter is based near Langley as well, in the Port Kells area of Surrey.

The Street Reapers appear to have come into existence in late 2017, a little more than a year ago, said Winpenny. “We have noticed them at several of the Hells Angel ride events over the summer of 2018,” she said.

There are believed to be between six to 10 members of the club; six is the minimum number for a motorcycle club of this type, Winpenny said.

The group is not believed to have an official clubhouse yet, but has been seen frequenting businesses in Fort Langley. It’s likely one or more members live in or have a business in the area, Winpenny said.

The Hells Angels are well known and have been established in many communities across B.C. for decades, including in Langley. But a new wave of smaller clubs have been cropping up in recent years, with different logos on their leather vests and jackets.

Winpenny said they are largely “support clubs” for the Hells Angels.

“They’re succession planning,” she said of the Angels.

The core of the Hells Angels membership is aging, and they need new members.

Support clubs are sources of new recruits who can be “patched over” to the Hells Angels if they measure up.

The CFSEU has been keeping an eye on the Street Reapers, but so far there have been no charges laid against anyone related to the motorcycle club or its activities, she said.

The affiliation police believe exists between the Street Reapers and other clubs should be a cause for concern for the public, said Winpenny.

The Hells Angels have been involved in drugs, weapons offenses, and violent crimes, she noted.

Hells Angels have gathered in Langley for years.

The White Rock chapter of the Hells Angels moved to Langley decades ago. In 2013, the chapter threw a 30th anniversary bash that drew a large number of bikers and guests to the gated clubhouse property on 61st Avenue east of 216th Street. Police were also there in droves, monitoring the coming and goings of the guests.