Brockville, Canada (December 7, 2018) BTN — Brockville police and counterparts from other agencies on Thursday arrested three men in connection with activities of the Outlaws motorcycle club. 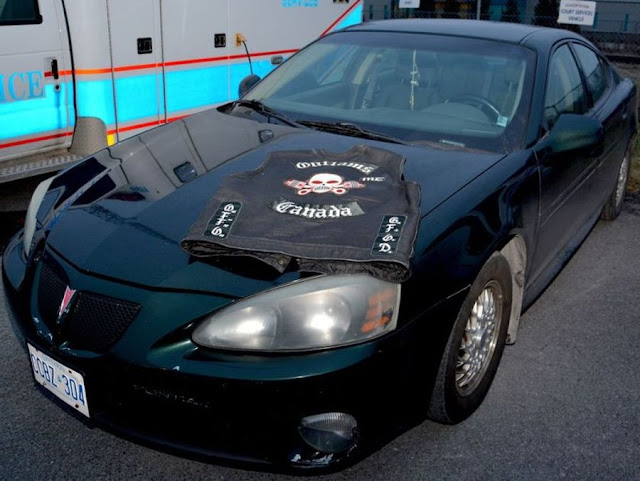 A 2004 Pontiac and a Outlaws MC vest were also confiscated

“This investigation is ongoing with potentially more arrests and charges forthcoming,” Brockville police said in a media release. The offences all happened here, Brockville Police Staff Sgt. Tom Fournier said. “They happened in the city of Brockville, I would say, from early summer on until (Thursday),” Fournier said. “It’s got to do with the gang activity.”

"Brockville police work in conjunction with other area forces because biker gangs are constantly on the move", Fournier added. City police have been aware of the Outlaws in the area for nearly two years, but, “over the past summer, there’s been a drastic increase” in their activity, he said.

This was the Brockville police force’s second motorcycle club raid this fall. In September, police arrested two other people in connection with drug and weapons offences with motorcycle club links. Four other people were initially sought after that raid, but all eventually turned themselves in to police in Brockville and Kingston.

Brockville police and the OPP biker unit on Friday urged citizens “not to support organized criminal activity, including seemingly harmless activities like purchasing support gear or participating in charitable activities organized by these groups.”

“The presence of Outlaw Motorcycle Gangs (OMGs) in any community should be a concern,” a joint police statement added. “Citizens should minimize contact with gang members and report any OMG activity to police in their jurisdiction.”