Brockville, Canada (December 20, 2018) BTN — Brockville Police have arrested a fourth man in connection with two motorcycle club raids in the city earlier this month. Officers arrested the 30-year-old man on Tuesday “in relation to the investigation,” police reported Wednesday.

Police, who had not released the latest accused’s name as of Wednesday afternoon, held him in custody pending a bail hearing on the same charges laid on the three earlier accused, including kidnapping and assault with a weapon. 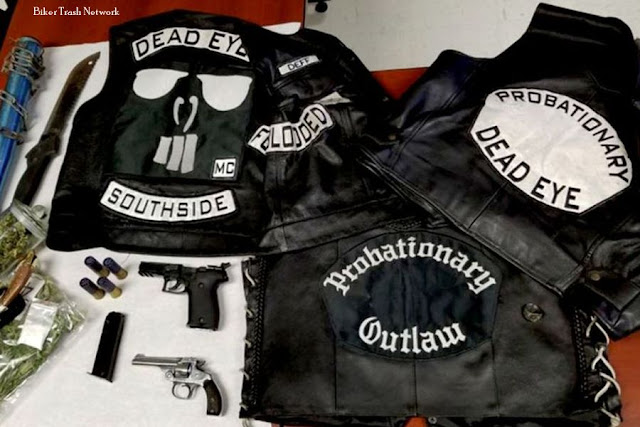 Confiscated items from the motorcycle club raids in Brockville, Canada

The Joint Forces Team raided two Brockville residences, at 283 Park Street and Apartment 17 at 16 Cartier Court, in relation to the Outlaws Motorcycle Club and an Outlaws support club, the Dead Eyes Motorcycle Club.

During those raids, officers seized a number of items, including Dead Eyes Outlaw Motorcycle Club vests, clothing and related paraphernalia; documents supporting involvement in a criminal organization; a small quantity of cocaine; cellphones; clothing “worn during commission of offences”; and a 2004 Pontiac Grand Prix.

City police say they have been aware of the Outlaws MC in the area for nearly two years, but there has been a “drastic increase” in their activity over the past summer. The twin raids Dec. 6 were the city police force’s second motorcycle club operation this fall.

In September, police arrested two people in connection with drug and weapons offences with motorcycle club links following a raid at 21 Sevenoaks Avenue in Brockville. Four other people were initially sought after that raid, one of whom later turned himself in in Kingston. Two of the remaining suspects turned themselves in to Brockville police, while the other also did so in Kingston.

Police Chief Scott Fraser said Wednesday he does not believe any further arrests are pending in connection with the December operation. While such arrests might put a dent in criminal organizations, it would be naive to expect the gang activity to stop, added the chief.

“As long as they keep committing criminal offences, we’ll keep arresting them and locking them up, or at least charging them,” said Fraser.

Police said earlier this month the club activity does not usually put at risk members of the public who are not in some way involved with drugs. “Generally, it’s not a random victimization,” Fraser added Wednesday.

“People who become victims are generally involved with them.” Still, the chief urged members of the public to report any suspicious activity to police.

SOURCE: The Recorder and Times