Surrey, B.C. (December 18, 2018) BTN — Surrey Mayor Doug McCallum says he had no idea that the Hells Angels had opened a clubhouse in his city, even after a pledge from police several years ago that the motorcycle club would not be allowed to set up there.

McCallum, who was elected in October, said on Monday that the Hells Angels are “not welcome” in Surrey.

After a service this past Saturday service for murdered Hells Angel Chad Wilson, his fellow bikers gathered at the HA’s Hardside chapter clubhouse, which is on a small acreage near 180th St. and 96th Ave. 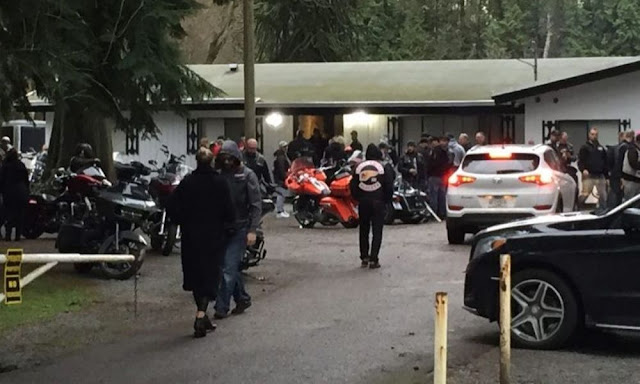 Officers from the Combined Forces Special Enforcement Unit, Surrey RCMP, Vancouver Police Department and other RCMP detachments monitored both the Maple Ridge funeral and the afterparty, both of which Postmedia reported on.

Wilson had moved over to the Hardside chapter when it opened on March 17, 2017. He had previously been a member of the Haney Hells Angels and the “Dago” chapter based in San Diego.
The clubhouse is believed to have opened some time in 2018 — five years after former top Surrey Mountie Bill Fordy pledged to block another Hells Angels chapter from using Surrey as its base.

McCallum echoed that sentiment in a statement to Postmedia on Monday. “Hells Angels are not welcome in Surrey. I was unaware that a clubhouse had been set up here recently,” McCallum said. “I will be addressing this matter immediately with the officer in charge of Surrey RCMP.”

That officer, Asst. Commissioner Dwayne McDonald, said Monday that his officers are well aware of the clubhouse. “The police and the City of Surrey were made aware of the Hells Angels intention to set up a clubhouse in 2017 and, at that time, the city and the police collectively reviewed all legal means to keep this clubhouse out of Surrey,” McDonald said in a statement Monday.

“However, the police have no legal authority to deny someone from purchasing or renting a residence.”
He said he agreed with McCallum that the Hells Angels are not welcome in Surrey “and that we will use every lawful means to ensure that their members are not participating in any criminal activity in this city.”

McDonald said both Surrey RCMP and officers with the anti-gang CFSEU “have regular contact with members of the Hardside chapter to ensure they understand our expectations regarding public safety.” There have not been any problems at events hosted by Hardside or other outlaw motorcycle gangs in Surrey, he said.

In January 2013, former head Mountie Fordy said he met with the president of the West Point Hells Angels chapter to tell him not to establish a clubhouse in Surrey. West Point started in 2012 and was expected to base itself in Surrey.

West Point waited years to open its clubhouse, which is located in a rented house on 2.25 acres in Langley, near the Canada-U.S. border. The Hardside chapter also appears to be in a rented house, which is located on two acres of property zoned agricultural. The property, assessed this year at just $47,000 because it is farmland, is owned by a Delta couple that has no apparent association with the Hells Angels.

Hells Angels spokesman Rick Ciarniello did not respond to an emailed request for comment Monday.

Currently, the Hells Angels are embroiled in a long-running court case with the B.C. government over the ownership of three clubhouses in Nanaimo, Kelowna and East Vancouver. The director of civil forfeiture wants the properties turned over to the government as instruments of criminal activity. The Angels have alleged the Civil Forfeiture Act is unconstitutional. The trial resumes in February.

CFSEU Sgt. Brenda Winpenny said the Hells Angels use their club as “a place where they can have their meetings, social gatherings, parties, and store assets belonging to the club.”

The bikers also use their clubhouses to create legitimacy and public awareness of their brand.

“Clubhouses are armed by overt surveillance and fortified to ensure security,” she said. “Clubhouses also serve as an intimidation factor in the communities where they exist.”