Fast forward several decades and government lawyers in Southern California say a similarly novel tactic could be the key to taking down the Mongols, a motorcycle club that has long been targeted by authorities for killings and drug trafficking. Instead of tax returns, the court battle this time will be won or lost in the decidedly unexciting trenches of trademark and forfeiture law 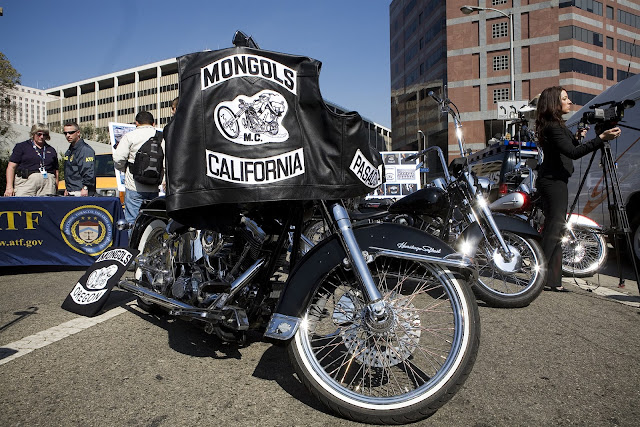 Law enforcement officials announce the arrests of members of the Mongols motorcycle club in 2008.

If the government prevails in a racketeering case in Orange County against the group’s leadership, prosecutors plan to seek a court order to seize control of the club’s coveted, trademarked insignia, which its members wear emblazoned on the back of their biker jackets.


Both sides agree the insignia — a muscled, Asian man with a ponytail and sunglasses riding a motorcycle beneath the club’s name in capital letters — is a vital and potent part of the club’s identity. In trying to wrest it away, justice officials are banking on the idea that if they own the trademark, they will be able to choke off the club’s lifeline by preventing current and future members from wearing the image.

But it’s an open question whether the untested legal ploy will work, trademark experts said.

“It’s a strange tool to use to try to stamp out an organization,” said Ben M. Davidson, a trademark attorney in Los Angeles. “This club doesn’t exist because of its trademark, and I don’t think losing it is what’s going to stop them from being a club.”

The Mongols were formed in the 1970s in Montebello, outside of Los Angeles, by a group of Latino men who reportedly had been rejected for membership by the Hells Angels motorcycle club. It has expanded over the decades to include several hundred members in chapters across Southern California and elsewhere.

Like many social clubs, the Mongols have a constitution and bylaws, while top officials in the club’s “Mother Chapter” in West Covina collect dues from members, according to court records. But the Mongols are also a group that investigators say kept a cache of assault rifles, other weapons and bulletproof vests at its headquarters.

The Mongols club has been in the federal government’s crosshairs for years, along with several other groups authorities have identified as “outlaw motorcycle gangs.” Despite their claims of being innocent social clubs, the groups, which include the Hells Angels, Vagos and The Outlaws, have long track records of warring with each other and, according to authorities, operate as criminal organizations that subsist on the drug trade.

In 2008, nearly 80 Mongols members were charged in a sweeping racketeering case that included an array of alleged murders, assaults and drug deals. The charges were the culmination of Operation Black Rain, an investigation that centered on Mongols who had become paid informants and four undercover agents from the Bureau of Alcohol, Tobacco, Firearms and Explosives who infiltrated the club’s ranks.

The idea of stripping the Mongols of their insignia was born in this earlier case. At a news conference announcing the charges, then-U.S. Atty. Thomas P. O’Brien laid out plans to take control of the trademark — a move that he said would give the government the authority to force Mongols members to remove their coveted insignia from their riding jackets.

All but two of the defendants in the case pleaded guilty, and a judge agreed the trademark should be forfeited as part of the sentences handed down. The judge ultimately reversed himself, however, after deciding none of the people charged in the case actually owned the trademark and, so, couldn’t forfeit it.

Prosecutors tried a new tack in 2013, when they filed a second racketeering case that was largely the same as the first but which named only one defendant — Mongol Nation, the entity which prosecutors say is made up of the club’s leaders and owns the trademark.

In the new case, for example, prosecutors accused the Mongol Nation of being responsible for the 2008 murder in San Francisco of a Hells Angels member by a Mongols member.

The new effort was nearly derailed when U.S. District Judge David O. Carter threw it out on legal grounds. But an appeals court overruled Carter, and the case finally went to trial last month. Over several weeks of testimony, prosecutors once again relied on the now-retired undercover ATF agents to testify about their time posing as Mongol members.

Defense attorney Joseph Yanny, meanwhile, argued that any violence by members was committed in self-defense, and anyone found dealing drugs was kicked out of the club.

If the jury, which began deliberating last week, delivers a guilty verdict on the new racketeering charges, the panel and Carter will then have to decide whether the Mongols should forfeit their trademark as part of the sentence. The government also wants large fines imposed on the club if it is convicted.

People and organizations commonly are stripped of cash, expensive cars, yachts and other tangible valuables as part of their criminal sentences.

Taking a trademark, however, is uncharted waters.

Through a spokesman, the U.S. attorney’s office declined to comment. But from what the government attempted in the first trial and their filings in the current case, it is clear prosecutors believe that with the trademark in hand they will have the authority to ban Mongols members from wearing their riding jackets, which display the insignia on the back and other smaller patches.

Yanny said he plans to raise multiple legal challenges if the government goes after the Mongols’ trademark, including the club members’ constitutional right under the 1st Amendment to express themselves freely.

Beyond those legal hurdles, experts in trademark law expressed doubts about the government’s plan. Unlike a patent, a trademark has legal heft only if the owner continues to produce the product or service that the trademark protects. The trademark Apple owns on its computers, for example, exists only as long as the company continues to make them, said Jason Rosenberg, a trademark attorney.

“I’m dubious,” Rosenberg said, echoing the doubts of other attorneys and academics. “Is the government really going to start its own motorcycle club?”

Even if justice officials licensed a law-abiding motorcycle club or law enforcement organization to use the Mongols insignia, Rosenberg and others remained skeptical of whether a judge’s seizure order forcing old Mongols members to hand over their jackets would stand up.

“They could probably get a seizure order for an inventory of jackets in a warehouse somewhere,” Rosenberg said, “but what happens six months from now when a motorcyclist is pulled over for wearing his jacket that he was given permission to wear by the club when they owned the trademark? I have never heard of trademark law being used to take the clothing off someone’s back.”