Los Angeles, CA (December  4, 2018) BTN — A federal prosecutor Monday told jurors who were “witnesses to a lengthy parade of cruelty” for the past five weeks in a trial against a Los Angeles-based motorcycle club that they should vote to yank the Mongol Nation’s trademark while the organization’s attorney argued it has been targeted because its membership is primarily Mexican-American. 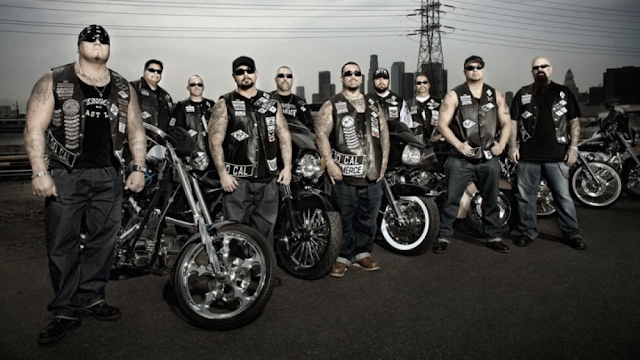 Members of the Mongols Motorcycle Club

“Over the past five weeks you’ve been witness to a lengthy parade of cruelty,” Assistant U.S. Attorney Steven Welk said of the evidence presented of the club’s criminal history since its founding in 1969. For the first time, federal prosecutors are trying to get a motorcycle club found guilty of racketeering and conspiracy to commit racketeering in order to have its trademark taken away. It would mean the club’s motorcyclists could no longer wear the patches they wear on their “cuts,” slang for leather jackets.

Welk argued that the club’s members commit a range of crimes from drug trafficking to murder, all in service to the organization and at the direction of its leaders.

He argued that “for the most part innocent civilians” are often the ones who become the club’s victims because they “had the misfortune to encounter members of this defendant organization.”

Mongol Nation’s members have a “twisted sense of honor” in its “codes” of conduct “that are inconsistent with the rules of civilized society,” Welk argued.

The trial featured about 40 witnesses, including former Minnesota Gov. Jesse Ventura, and about 200 exhibits, Welk noted. The patches Mongols wear on their leather jackets are meant to be “messages and signals” to rival gang members and even the general public that Mongols should be feared.

“A Hell’s Angel knows what that patch means,” Welk said. “When they see that Road King vest with a skull-and-crossbones patch they know what he did, that he killed… for his gang.”

A “civilian” might not quite understand the specific meaning of a “murder patch” featuring the skull-and-crossbones, Welk argued, but they get the general idea and are often the victims when they “offend” a Mongol.

“Their trigger mechanism is shockingly low,” Welk said. “So those (patches) are powerful, not just to the men who want to wear them, but to everyone.” Welk noted that Mongols are instructed to not wear their leather jackets with patches in a car, and when they drive a car they are taught to fold them in a way to conceal their affiliation with the club from police.

“It’s all about protecting themselves because they are a paranoid organization,” Welk argued. “They’re fearful and deeply suspicious of the government.”

Even if one of its members gets a motorcycle stolen they are told to not report the crime, but to instead report the vehicle missing so if it’s found they can retrieve it, Welk said. Instead, the Mongols would rather investigate a theft of their property on their own, he added.

“They consider themselves a law unto themselves,” Welk said. The club’s wives and girlfriends are considered “property,” Welk said. And the gang is noted for its prejudice against African-Americans, Welk argued.

Welk argued that Ventura testified that when his fellow club members were about to discuss any illicit activity he would leave the room so as not to be tied up with it. 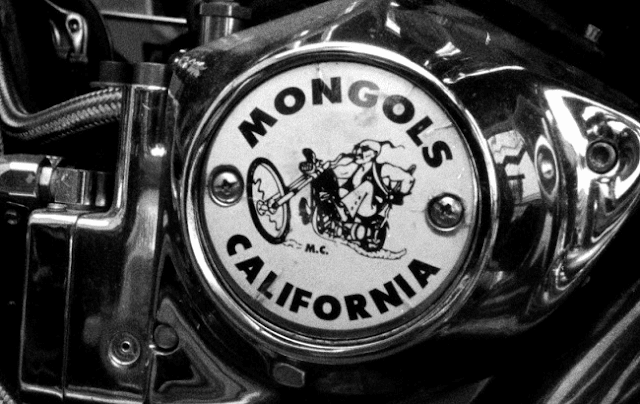 The Feds are going after the Mongols MC's logo

Ventura said after his testimony that he considered the government’s attempts to seize the club’s trademark as a threat to the First Amendment. “This is bigger than the Mongols club,” Ventura said. “You’ve got the government… telling you what you can and cannot wear.”

He added, “The First Amendment is to protect unpopular speech… Some people may think the Mongols are horrible, but they still have equal rights under the Bill of Rights… Who’s next? The Shriners? Where does it end? It’s a First Amendment issue top to bottom.” Ventura said he didn’t know anything about the crimes federal prosecutors have alleged over the years.

“They did not have that when I was in it,” Ventura said of his active membership in the gang, beginning in the early 1970s when the ex-Navy SEAL returned home from the service. “There are cops who break the law, so do you devalue the whole police force?” Ventura said.

Ventura said he wears a denim jacket he received as Mongol when he goes out motorcycling. “That’s how old I am,” the 67-year-old Ventura said with a chuckle. Ventura wondered what would happen if the government wins its case. “Are they going to stop the 38th governor of Minnesota and take his jacket?” Ventura said.

Attorney Joseph A. Yanny argued that the government’s case is “the best book of fiction I’ve ever heard in my life.” Yanny said the government went after his client for racial reasons. “I believe this group has been targeted because they have a lot of Mexican-Americans in there,” Yanny said.

Yanny argued that much of the government’s case rests on testimony and quotes from documentaries from former members who made plea deals with prosecutors. “People will sign anything to get a better deal for themselves,” Yanny said, adding that one former head of the club denied in his testimony that he did any of the crimes he pleaded guilty to.

“And they all got less time,” he said of the 70 some former members who have pleaded guilty in cases stemming from undercover investigations in which FBI and ATF agents infiltrated the club. “It’s time to send a message for sure to the ATF and U.S. government,” Yanny said. “They shouldn’t afflict people this way.”

Yanny argued that the members who have committed crimes were kicked out for violating “zero tolerance” policies against illicit activity that draws the attention of law enforcement. Yanny even argued that one member convicted of murder was wrongly convicted and that he would like to help the man win his appeals.

“Rogue acts happen,” Yanny said. “Individual men have been convicted.” Yanny accused federal prosecutors of taking the “wrongful acts of a few individuals” and escalate it to a “group conviction.” “These are ordinary people,” he said of his clients. “They are hardworking people. You don’t see the Hell’s Angels here. You see the Mongols and minorities are easy to pick on and they typically don’t fight like these guys do.”