Marysville, WA (January 2, 2019) BTN — The North County Chapter of the Bandidos Motorcycle Club helped to collect more than 3,700 pounds of food for the Marysville Community Food Bank this December.

The club’s food drive was held on Dec. 15 in Marysville at the Lucky 13 Saloon and helped to bring in a total of around 3,760 pounds of food in addition to $1,461 raised from items auctioned at their event.

This was the first time that the local club has decided to put on a holiday food drive and Bandido Milkman Josh Leathers, a member of the club and one of the main organizers of the event, was happy with how it went. “Overall I believe that the food drive was a success,” he said. 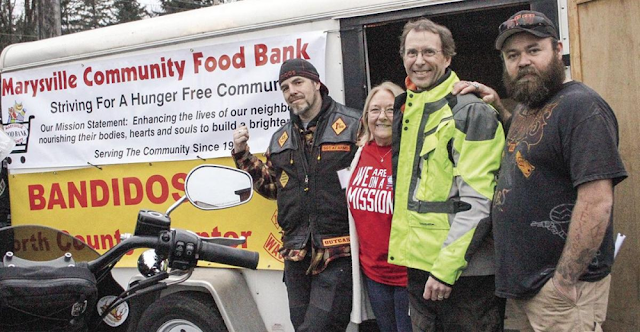 The club had decided they wanted to help locals this holiday season and decided to try a food drive. “We wanted to give back to the community so we chose to give to the local food bank,” said Leathers. “They do a lot of good work for the less fortunate in the community,” he said.

Donations, such as from the Bandidos Motorcycle Club, help the food bank continue serving into the new year and typically keep the shelves stocked for months to come.

“The Marysville Community Food Bank provides groceries to about 300 families on an average week,” said Deierling. “Nearly one person in 10 in Marysville/Tulalip/Lakewood utilizes the food bank at least once during the course of the year,” he said. 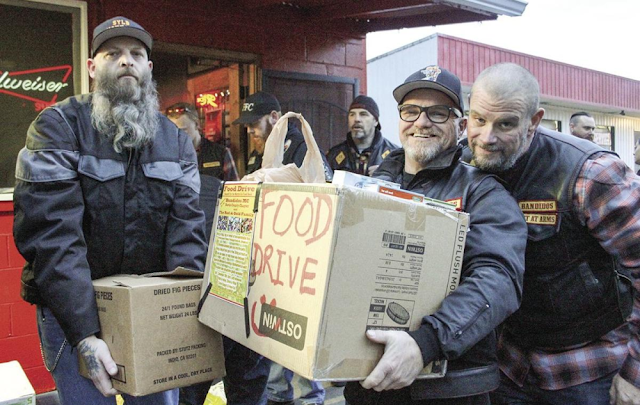 Leathers said he was glad that people came together to work on the food drive. “I would say I enjoyed bringing everyone together in the community, including motorcycle clubs and other civilians,” he said.

Deierling appreciated the help from the local club as well.

“It was incredible to ride up to the Lucky 13 Saloon and see rows of Harley-Davidson's, a flurry of bikers socializing and a trailer awaiting the bounty of food that was stacked inside the bar and being carried up to a scale to be weighed,” he said. “This was an amazing first-time event that I sure hope becomes and annual tradition.”

Leathers said that the club is currently considering if they should run the food drive again next year. “We are looking into that right now and will have a decision in the next couple of months,” he said.