London, Ontario (January 8, 2019) BTN — One person remains on the lam, yet two people were arrested and a slew of items was seized — including drugs and three Hells Angels vests — during police raids in London over the weekend.

Police are still looking for a 27-year-old woman, but made the two arrests and seized the drugs during raids on Saturday morning in London. 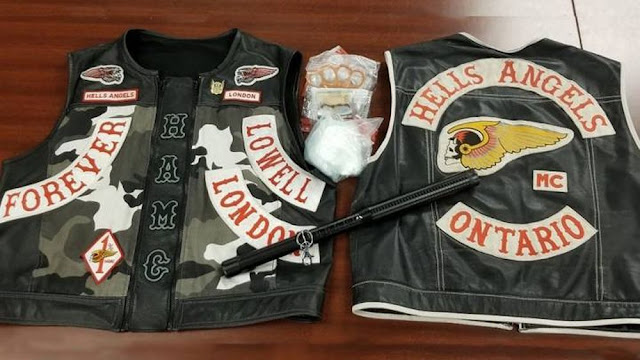 Provincial police executed the search warrants with the help of the Organized Crime Enforcement Bureau, the Biker Enforcement Unit, London police’s Guns and Drugs Section, and the RCMP.

Sean Burger, a 47-year-old London man and known Hell’s Angel member, has been charged with possession of cocaine and Percocet for the purpose of trafficking, possession of a firearm or ammunition, and possession of a prohibited device. He appeared in court Monday.

Jessica Boloshetshenko, a 33-year-old London woman, has been charged with possession of Percocet and unauthorized possession of a weapon. She’s expected to appear in court Feb. 15.
Police say they continue to search for a 27-year-old woman.