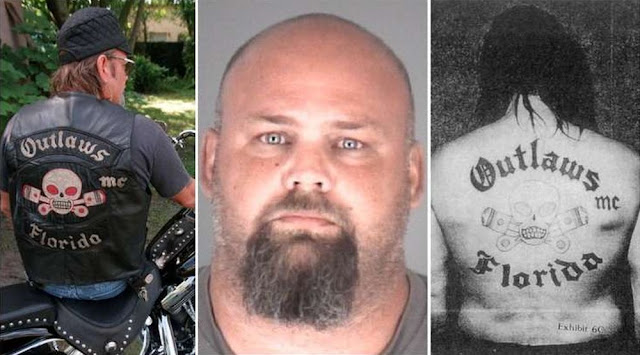 The execution-style killing put law enforcement on high alert that a motorcycle club war was brewing. It also led to numerous arrests. Some of the cases are inching toward trial.

While motorcycle clubs are far from their heyday, they’re still around in the Tampa Bay area. Many may not realize it, but motorcycle clubs actually have a long and dark history in Tampa Bay that includes everything from from prostitution and murders to a shootout with deputies at their old Tampa clubhouse near Busch Gardens.

Who are the Outlaws?
The Outlaws, or American Outlaw Association,  are the dominant outlaw motorcycle club in Florida, and one of the “Big Four” biker clubs in the United States (the others are Hells Angels, the Pagans and the Bandidos). They are classified as a violent gang by the U.S. Department of Justice.

Biker culture started to emerge after World War II. The Outlaws formed in Chicago in 1959 and now have chapters in over two dozen countries. Most of the members can be found throughout the United States, Germany, Australia and England.

Florida has been home to various Outlaw chapters since the 1960's, and the club has been active in Tampa as early as the ’70s.  The most well-documented Outlaw activity in the state has taken place in Key West and other parts of South Florida. 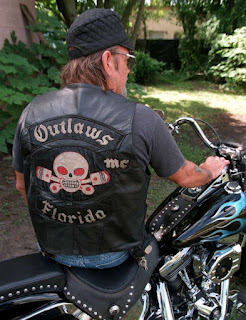 Outlaws are identified by “Charlie,” the red and black logo of a skull over crossed pistons, which appears on member’s uniforms.

To be initiated a patched member, prospective Outlaws must go through a probation period that includes coming to meetings, also known as attending church.

According to Times archives, the logo is protected “like a valuable trademark.” One Florida-based member, Stephen Lemunyon, was even accused of beating a man nearly to death for falsely claiming association with the logo.

Club membership is limited to men who ride cruiser-stye motorcycles with engines of 1,000 ccs or more, such as Harley- Davidson.

Women are seen as property. Outlaws have been known to trade female supporters for items like drugs and force them into prostitution or topless dancing.

Murders, shootouts, firebombings: A history of the Outlaws in Tampa Bay 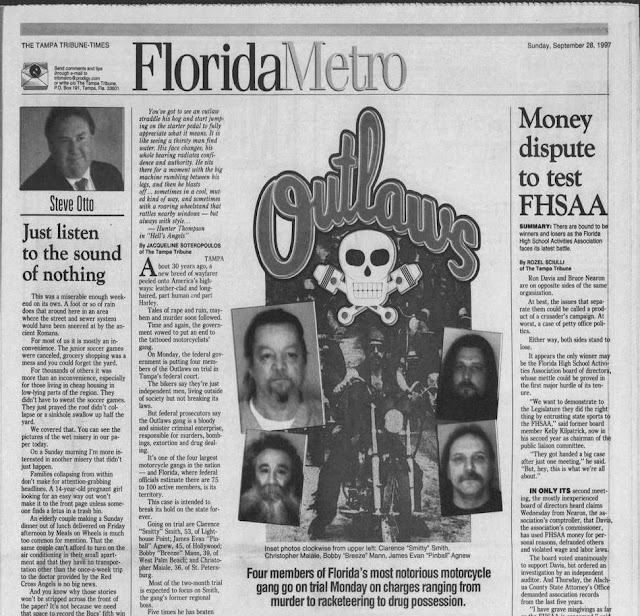 Outlaws were suspects in dozens of murder cases throughout the state in the ’70's and ’80's. But members of the club were skilled in quieting witnesses, and for decades law enforcement struggled to pin charges on them.

In the 1990's, federal prosecutors concocted a plan to wipe out the club for good. Instead of trying to nail down individuals for specific crimes, prosecutors said the Outlaws' crimes, such as murder and extortion, were “part of an ongoing criminal conspiracy.” This led to several successful convictions. But the goal to exterminate the Outlaws failed over and over again — the club is still present in the area.

Some notable moments from the Outlaws' history in Tampa Bay:

In 1976, law enforcement stopped by the club’s Tampa headquarters, located about two miles west of Busch Gardens, with a narcotics search warrant. The visit ended with a shootout. Three Hillsborough sheriff’s deputies and one Outlaw were shot, and one of the deputies was left paralyzed.

In 1983 and 1988, dozens of club leaders were convicted in Jacksonville and Fort Lauderdale. One was indicted in 1989 for “threatening to skin the tattoo off the arm of a rival biker," while another allegedly disemboweled a person who cooperated with police and threw the corpse into a lake. Though these busts gutted Outlaw membership, the club maintained active chapters in Tampa, St. Petersburg and Daytona Beach.

From 1995 to 1997, several cases made Tampa the “epicenter of Outlaws prosecution,” the Associated Press reported. Federal prosecutors won convictions or guilty pleas from 30 Outlaws from Tampa Bay and South Florida. At least 20 were convicted on charges of racketeering, drugs and weapons charges from ’95 to ’97. During the trial at the end of 1997, prosecutors took aim at the regional leaders of the club to try to eliminate it.

“They’re like cancer," said Terry Katz of the Maryland State Police in 1995. “If there are any cells left, it will come back, and regenerate.”

In 1995, Florida had six Outlaws chapters -- the most out of any state. Sixteen Outlaws from the Tampa, St. Pete and Daytona Beach chapters were arrested on charges including racketeering, kidnapping, possessing illegal weapons, running drugs and firebombing a rival club’s clubhouses.

The list of accusations was long and colorful: Jeffery “Big Jeff” Hal Sprinkle was accused of purchasing a 15-year-old girl “to be his personal property.” Tampa Outlaws president Edgar “Troll” Ruof was accused of shooting a man in the head in North Carolina 20 years prior. Other Outlaws allegedly hired members of the Bandidos motorcycle club to kill a Tampa police officer.

According to the Times archives, the 1995 federal trial in Tampa was one of the most important prosecutions of a biker club in the country. By the end, a federal jury convicted 14 of 16 members. 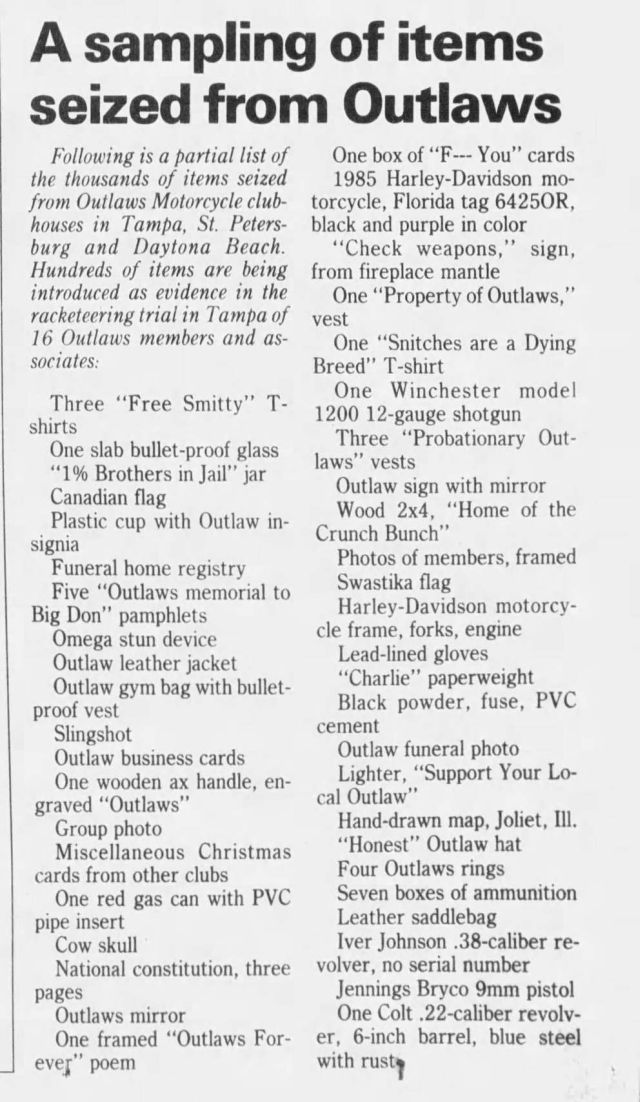 In 1996, authorities carried out Operation Silverspoke and Shovelhead and arrested seven Outlaws on accusations that they were running a 16-year crime scheme. The members were arrested on an 18-count federal indictment aimed at taking out the upper ranks of the club. Authorities accused the Outlaws of eight murders, three bombings and 17 drug charges.

St. Petersburg-based Outlaw Christopher Maiale was targeted for distributing meth and extortion for threats against two people. After the arrests, U.S. Attorney Charles Wilson said, “We think this eliminates the Outlaw club as a significant threat to Florida.”

In 1997, four Outlaws went on trial: Maiale, then 36; former Tampa Outlaws president Clarence “Smitty" Smith, then 53, of Lighthouse Point; James Evan “Pinball” Agnew, then 45, of Hollywood; and Bobby “Breeze” Mann, of West Palm Beach. By November, the government had spent nearly $250,000 bringing the case against the Outlaws. The prosecution resulted in four convictions. 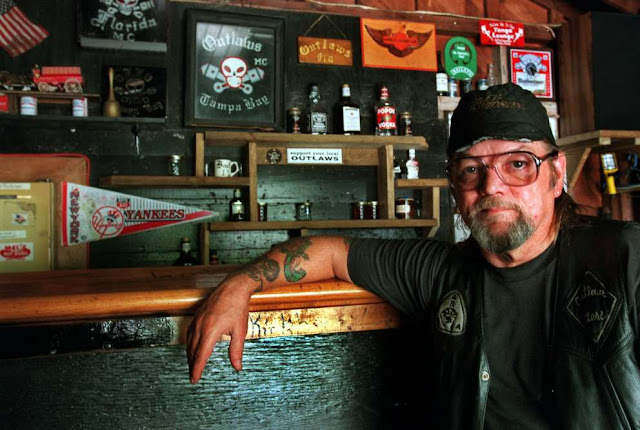 In 2001, international Outlaws leader Harry “Taco” Bowman received two life sentences plus 83 years in a federal trial in Tampa, toppling his 20-year reign of absolute power. Bowman became one of the top national and international leaders of the club in the ‘80's. He was indicted in 1997 and remained on the FBI’s Ten Most Wanted Fugitives list for two years. Authorities tracked him down while he was visiting family in Detroit in 1999.

Former Outlaws testified against Bowman in exchange for lighter sentences. A stream of tattooed bikers admitted to blowing up rival clubhouses and throwing delinquent club members off of motel balconies. By the end, jurors found Bowman guilty of using clubhouses in St. Petersburg, Tampa, Orlando, Fort Lauderdale and Daytona Beach for gang activities. The list of crimes includes fire bombings, drug trafficking, ordering killings of rival club members, and the transfer of firearms including machine guns and silencers. 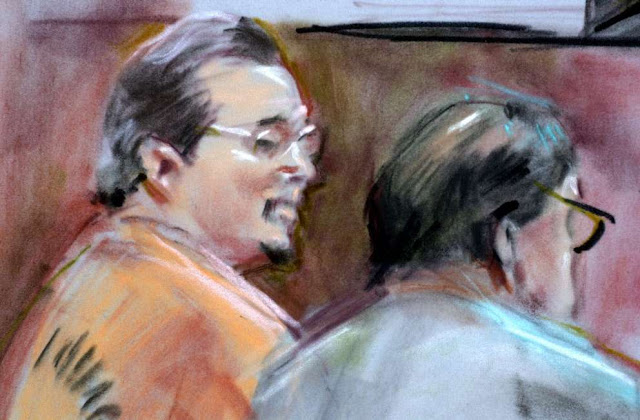 In 2003, Bowman’s successor, James Lee “Frank” Wheeler, was convicted in U.S. district court in Tampa. He was the second international Outlaws president to be convicted in Tampa. Wheeler got 16 1/2 years for racketeering, drug distribution and obstruction of justice. Wheeler’s criminal record stretches back to 1967. Once again, prosecutors cut deals with former Outlaws in exchange for information that could be used to put the leader away. 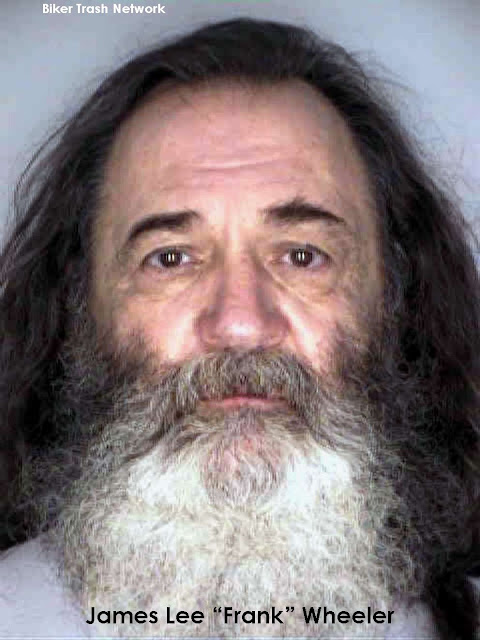 In 2015, a violent shootout involving cops and at least six clubs in Waco, Texas, left nine bikers dead in a strip mall parking lot and resulted in the arrest of 177 members. The slayings prompted Tampa Bay Times criminal justice reporter Dan Sullivan to investigate motorcycle gang culture in Tampa Bay. He found that biker gangs are still dangerous and widespread in Florida, though the clubs became more secretive after all of the public attention they received in previous decades. An expert on biker gangs estimated that Florida had probably 800-1,000 members. Many have day jobs, from operating strip clubs to practicing medicine or law. 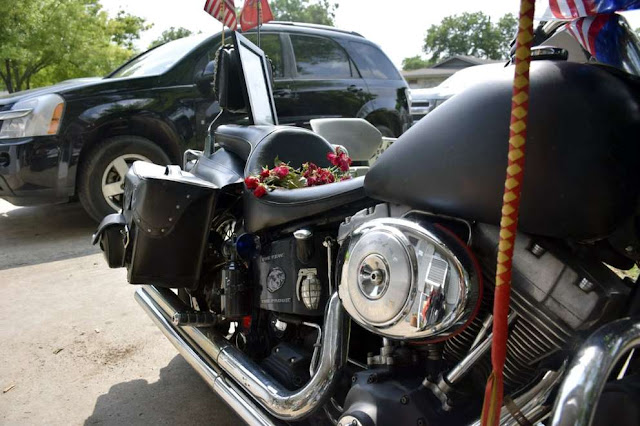 In September 2016, a bar fight broke out in Key West. About 15 Outlaws members were suspected, including Hillsborough fire rescue medic Clinton Neal Walker, then 33, of Bradenton.


Walker was arrested and placed on paid administrative leave, but his actions sparked a series of countywide ordinances that prohibited Hillsborough County employees from participating in motorcycle clubs or other gang activity. In a memo, county administrator Mike Merrill said being a member of a criminal organization was “contrary to the mission of public service.” 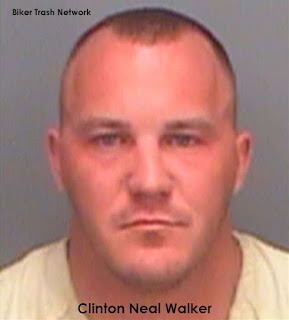 Walker had already been placed on administrative leave three months prior to the Key West fight -- he had joined in another bar fight in May and brawled with a St. Petersburg police officer.

After the new ordinances were in place, he became the first county employee to be investigated for gang activity.

In January 2018, Walker was fired after an internal investigation revealed he had worn his firefighter uniform while off-duty in order to help another club member, James Costa, who was shot while riding his bike in July 2017.

Costa was president of the St. Petersburg Outlaws and had recently retired as a Hillsborough County Fire Rescue captain after the media publicized his ties to the Outlaws.


December 2017: While idling in his truck at a red light during rush hour, Cross Bayou Outlaws chapter leader Paul Anderson was executed by members of a rival gang.

Three members of the 69ers Motorcycle club were arrested on charges of first-degree murder. According to Pasco Sheriff Chris Nocco, Allan “Big Bee” Guinto had been tracking Anderson in a scout vehicle, while Christopher Brian “Durty” Cosimano and Michael Dominick “Pumpkin” Mencher followed on motorcycles. Anderson sat in his vehicle near the Suncoast Parkway and State 54 interchange.

Cosimano knocked on the truck window to get his attention before shooting Anderson, deputies said. After the arrests, Nocco said he worried that a war could erupt between the clubs. “There’s no doubt in my mind there’s going to be more violence because of this,” Nocco said.

Thousands of bikers showed up for a funeral procession to honor Anderson.


The three 69ers are still in jail. Two others, Erick “Big E” Robinson, and Cody “Little Savage” Wesling, were also indicted. If found guilty, each man would face up to life in prison, Dan Sullivan reported.

The court documents that were recently released showed that the killing was prompted by a fight at a local brewery between Outlaws and members of the 69′ers -- who identify their local group as the “Killsborough” Chapter. The 69′ers were particularly upset because the Outlaws had stolen some of their uniforms during the fight.

First, the documents state, the 69′ers tried to assassinate an Outlaws leader by shooting Costa as he drove his Harley across the Sunshine Skyway Bridge. He was able to escape. Weeks later, the Outlaws clubhouse in St. Petersburg was destroyed in a fire that the 69′ers are suspected of setting.