February 19, 2020 BTN — Few details of the shooting that took place on February 16, 2020 at Your Place Bar located in Midland, Texas are not being released as of today. According to several main stream news media outlets, they say the local police are still on a fact finding mission. 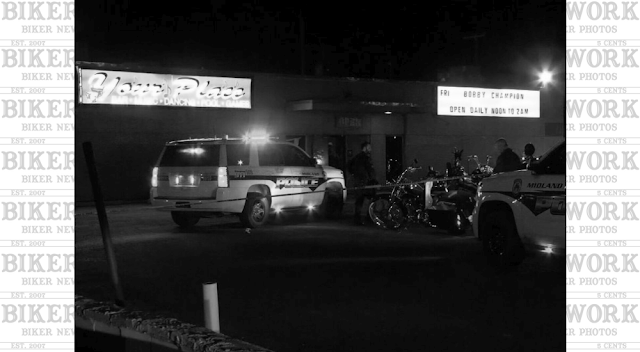 Scene outside the Your Place bar in Midland, Texas

One killed, three hurt in shootout between motorcycle clubs at Texas bar


Midland, Texas, USA (February 16, 2020) BTN — One person died and three others were taken to the hospital after police say they were shot in an incident between rival motorcycle clubs at a Texas bar.

According to the Midland Police Department, officers were called to Your Place bar in Midland, Texas, at 8:26 p.m. Sunday, February 6th. When police arrived at the scene, they found that four people had been shot, one fatally.


The three surviving victims were taken to the hospital. One is in critical condition, a second suffered major injuries and the third suffered only minor injuries.

No names have been released at this time.


Officers learned there had been a shootout at the bar between rival motorcycle clubs. They believe that multiple suspected club members were involved. The suspects were last seen heading westbound towards Odessa.


Midland, Texas, USA (February 17, 2020) BTN — A City of Midland spokesperson told CBS7 Monday that the police department would not have any updates today on Sunday night's biker gang shooting. One person was killed in the shootout between the rival clubs, according to police. The last update we got Sunday night said that two others were in critical condition and a fourth had minor injuries.

CBS7 has also learned that once the gang members arrived at the Midland Memorial Hospital emergency room, the hospital placed the ER on lock-down. We're told that's standard procedure during an incident like this.


The city says the other bikers were last seen riding West towards Odessa.

The city also scheduled a news conference late Monday morning for 4:30 p.m. to discuss the "state of biker gangs in Midland." Thirty minutes before it was supposed to begin, we were told it was canceled because they needed to do more research. The shooting happened at the Your Place bar at 3704 West Wall Street.

Your Place, 3704 West Wall Street, will remain suspended until Feb. 24 as TABC agents and Midland police investigate the scene.

The seven-day suspension, also known as a summary suspension, was requested by the Midland Police Department and was served by TABC the afternoon of Feb. 17, according to TABC Executive Director Bentley Nettles.

“The goal of the suspension is to allow TABC agents and local police the opportunity to safely investigate the scene of a deadly incident without fear of retaliation or additional violence,” Nettles said. “TABC’s investigation will seek to determine whether the bar’s actions or policies played any role in the incident. We will also examine the bar’s security policies and procedures to find out whether appropriate steps were taken to ensure guests’ safety.”

All alcohol retailers who operate under a TABC-issued license or permit are required to ensure the safety of their premises and guests. As Texas’ sole regulator of the alcoholic beverage industry, TABC’s law enforcement agents frequently investigate violent incidents which take place at licensed businesses such as bars, clubs, or liquor stores.

While Your Place will be able to resume normal operations on Feb. 24, it’s likely the investigations by TABC and the Midland Police Department will continue for several weeks.


Midland, Texas, USA (February 20, 2020) BTN — The motorcycle clubs involved in the shooting on Sunday, February 16, 2020, were the Bandidos and the Mongols. According to the City of Midland, the deceased victim has been identified as Alex Canales Villarreal, 45 years of age, from McAllen, Texas. Next of kin has been notified, the investigation is ongoing. SOURCE: Your Basin