Halifax, Nova Scotia (February 27, 2020) BTN — RCMP raided the clubhouse of the Red Devils motorcycle club on Alma Crescent in Halifax on Thursday afternoon as part of an organized crime investigation.

Staff at the nearby Mary Brown’s Chicken outlet said they heard the commotion in the early afternoon. “There were cops here earlier,” Jennifer Nolasco said at about 3:15 p.m. “We heard like a bang, a loud one, a cop went inside and they said they threw tear gas (and) it will take a while for it to be gone.”

Police had left the scene by about 2:00 p.m., Nolasco said. “We just saw one police car but the cop said there were a few cars which were not visible.”

She said the officer who came into the fast food outlet told them they had a search warrant but the staff did not see if anyone was taken into custody. 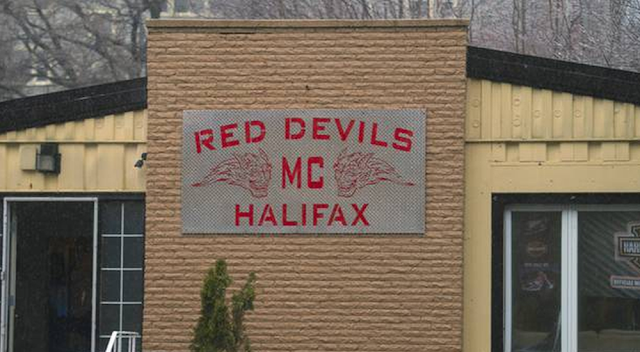 “Nova Scotia RCMP is currently engaged in an operation that involves searches of a number of properties in the HRM,” she said. “This is an ongoing serious organized crime investigation and more information, including possible arrests, charges and seizures, will be published when available.”

Croteau could not specify what other locations besides the Alma Crescent residence was involved. Nor could she confirm it was the Red Devils clubhouse. Online sources identified the clubhouse.

Julian Sher, an investigative journalist and author of several books on bikers and organized crime, said the Red Devils are affiliated with the Hell’s Angels.

“These guys are Hells Angels wannabees,” Sher said in an email. “Puppet clubs of the outlaw motorcycle gangs are just as dangerous as the real thing – sometimes even more so. They are like a farm team for the HA and they want to prove they are as bad as the baddest.”