Las Vegas, Nevada, USA (February 24, 2020) BTN — Eight accused Vagos motorcycle club members were acquitted Monday of all charges alleging they were part of a broad criminal racketeering enterprise that committed violent crimes for more than a decade, including the killing of a rival Hells Angels leader in a casino shootout in 2011. 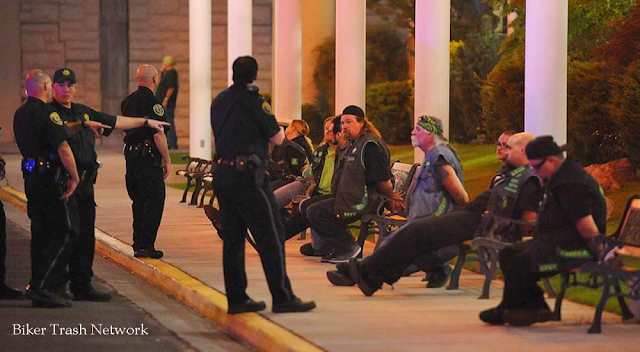 Gasps erupted in the Las Vegas courtroom as U.S. District Judge Gloria Navarro read the jury’s not guilty verdicts for each man.

“This is what happens when the government tries to put people away with tricks and liars,” said Daniel Hill, attorney for Pastor Fausto Palafox, former international president of the Vagos Motorcycle Club and first-named defendant in the case.


The jury deliberated the equivalent of only about two days after more than five months of contentious testimony at the troubled trial that had some witnesses stunningly recant their own stories on the witness stand.

Defense attorneys lost bids during trial to have Navarro throw out the case as deeply flawed — including after prosecutors disavowed the testimony of their own star witness, former Vagos member Gary “Jabbers” Rudnick.

Navarro said repeatedly it would be up to the jury to decide the facts and reach a verdict.

Rudnick testified and then acknowledged fabricating his account that Palafox issued a “green light” go-ahead to kill Jeffrey Pettigrew, then-president of the Hells Angels chapter from San Jose, California.

Palafox, 56, watched Monday as the 10 women and two men filed out of the jury box, and he mouthed the words, “Thank you.”

U.S. Attorney Nicholas Trutanich declined outside court to talk about how the prosecution unfolded and whether the government will continue to trial for 13 other accused Vagos defendants in the case.

“I’m grateful for the court’s time, the jury’s consideration and the diligent work of the assistant U.S. attorneys,” Trutanich said, adding that he believed the jury reached a verdict it found “fair and just.”

The government chose to take the Vagos case to trial despite Rudnick previously recanting his testimony at a state trial that led to a murder conviction in Reno against Vagos member Ernesto Manuel Gonzalez. The Nevada Supreme Court threw out that result because of improper jury instructions. Gonzalez was awaiting a retrial when federal charges were brought.

Gonzalez, now 42, was among the defendants acquitted Monday. Others were Albert Lopez, Albert Perez, James Gillespie, Bradley Campos, Cesar Morales and Diego Garcia. None testified at trial. All are from California. They range in age from 36 to 70.

Collectively, they were accused of conspiring since 2005 to deal drugs and commit violent crimes including killings, robberies, extortion and kidnappings in California, Arizona, Hawaii, Oregon, Utah and Nevada.

U.S. Justice Department attorney John Han told the jury a “war” between the Vagos and Hells Angels over territory and respect in California dates to 2005 and continues today.

The focus of the case was the shooting inside the Nugget casino in Sparks. The jury was told Rudnick argued with Pettigrew, and that Pettigrew threw a first punch before pulling a gun and firing several shots while casino patrons dived under blackjack tables and behind slot machines.

The melee continued for about two minutes before Pettigrew was shot by Gonzalez. His attorney, Michael Kennedy, maintained that his client was within his rights to defend himself and others when he shot Pettigrew.

The acquittals came in the same courtroom and before the same judge who in December 2017 found flagrant misconduct by prosecutors and dismissed criminal charges against Nevada rancher Cliven Bundy, his sons and supporters in a 2014 armed standoff with government agents. An appeal of that dismissal is pending.
Email ThisBlogThis!Share to TwitterShare to FacebookShare to Pinterest
Labels: 1%er News, Biker News, Harassment, Vagos MC
Newer Post Older Post Home