Charleroi, Pennsylvania, USA (February 8, 2020) BTN - A Washington County jury delivered a mixed verdict Friday, finding two members of the Pagan's Motorcycle Club not guilty of attempting and conspiring to commit homicide but convicting them of lesser charges in the April 18 beating that nearly killed a former officer of the motorcycle club. 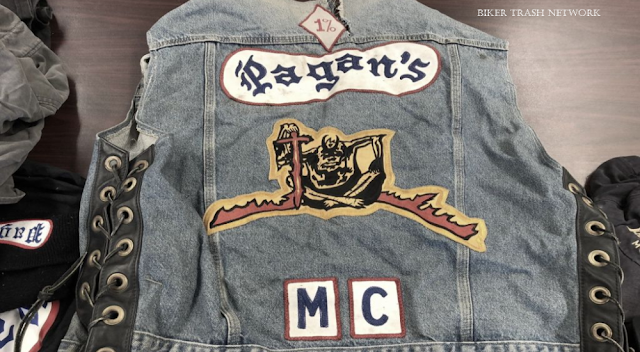 Matthew Vasquez, 31, of Monessen, and Joseph Olinsky III, 46, of McKeesport, were charged by Charleroi Regional police in July. The victim was Troy Harris, 54, of Fallowfield Township, who was attacked at roughly 10:20 p.m. at the Charleroi Slovak Club. Surveillance footage from the bar was shown repeatedly to jurors throughout the trial.

“We respect the verdict of the jury,” said Deputy District Attorney Jason Walsh.


Common Pleas Judge John DiSalle said sentencing will occur in 90 days. He said they’d be denied bail, as they were before the trial. Vasquez and Olinsky looked intently ahead and showed little expression as DiSalle explained what would happen next in the case.

Harris was once president of the Fayette City chapter of the Pagan's but was now a leader in the Sutars Soldiers, another motorcycle club started by former Pagan's. Testimony showed the pair and others who were involved in the attack had been at the Junction Tavern in Perryopolis beforehand.

Prosecutors contended that the two defendants and five other Pagan's – including Paul Cochran, 55, who testified against his former comrades – went from Perryopolis to the members-only bar at 700 McKean Ave. to beat up Harris on orders from higher-ups in their organization.

During their closing arguments, the defense contended that claim wasn’t supported by the evidence.

Stephen Colafella, who represents Vasquez, said the prosecution didn’t “connect those dots” and show there was some conspiracy at play.

Walsh told jurors that it was no coincidence seven Pagan's who live in different areas and belong to multiple chapters showed up at the same place, where Troy Harris happened to be.

“Use your common sense, ladies and gentlemen,” he said.

Vasquez said his friend, Zachary Yagnich – who is charged in the case and helping prosecutors – was going to the Slovak Club, where Yagnich, 27, was vice president. Vasquez said Yagnich, a supporter of the Pagan's, would have been afraid to go alone because Harris bullied him.

Vasquez said the group stopped by there on their way to a bar in Monongahela, and it was his idea to go to the watering hole in Charleroi. He said no one told them to do so, and they didn’t intend to do anything to Harris.

His testimony differed in some respects from the account given by Yagnich, who said he’d spoken by phone to Vasquez and Brian Keruskin, president of the Fayette City chapter, about Harris’ whereabouts before he met the group of bikers in the parking lot and let them into the club. He maintained he didn’t know what the group was going to do in advance, but that Keruskin did tell him that some guys were on their way and he should leave.

Vasquez maintained the group happened to walk by Harris on their way to their seats. He said he saw Jason Huff slap Harris, who’d sneered and extended his hand toward Huff in a gesture of disrespect. Vasquez said he knew Harris to be dangerous and saw the older man had a gun holstered on his hip, so Vasquez punched him.

He said he then struggled to disarm Harris when he pulled a gun, and for a time Vasquez was on the floor with him. Video showed others kicking and stomping in the area of the floor where Harris was lying.

“What Matthew Vasquez did, ladies and gentleman, amounts to a simple assault,” Colafella said. “He punched (Harris) one time, without justification.”

Harris’ wife, Michele Mackey Harris, testified she saw no one else on the ground while she tried to protect her husband, who has lasting physical and cognitive injuries.

Following the verdict, Colafella said the outcome was “unfortunate” but that he respected it. He said preconceptions about clubs like the Pagans made it a tough case.

“There’s video evidence, and it makes it very challenging to try to distinguish your client from others, when it’s a scrum like that, when they’re all wearing the same shirts,” Colafella said. “I thought the case was well tried on both sides. Matt had the opportunity to go up and present his side.”


Keruskin and Michael Barringer, sergeant-at-arms of the national Pagan's organization, each previously pleaded guilty or no contest to a conspiracy charge. Other than Cochran, Olinsky and Vasquez, those accused of pummeling Harris have entered pleas and received prison terms.

Using her client’s nickname, Colbert asked jurors to “let Teddy go home to his wife.” She said that none of the witnesses had specifically identified her client as having punched or kicked Harris. Additionally, she said there was no testimony implicating him in a plan ahead of time.