Middletown, NY  (February 6, 2019) BTN — A Middletown firefighter and a retired Spring Valley police officer were among the dozens arrested as part of a sweep of allegedly drug dealing bikers in Orange County Tuesday. 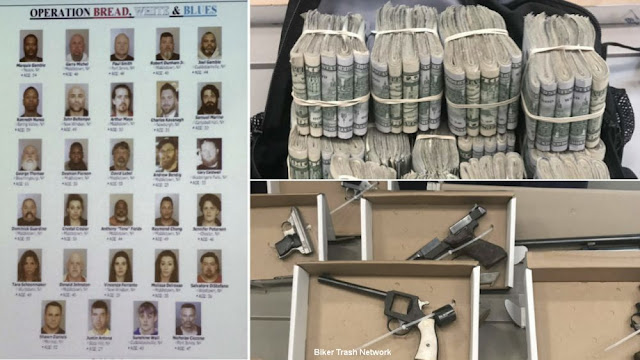 Authorities say more than 20 people were taken into custody when search warrants were executed at 15 locations in connection with two separate drug rings, with the same man -- fire Lieutenant Paul Young -- at the center of both.

In all, 29 people were targeted for arrest, and investigators say leaders of the drug rings were so brazen that they sometimes met at the fire house.

The suspects were identified as:

The drugs reportedly came from both domestic and foreign sources, with the suspect allegedly selling the drugs throughout Orange County.

Most raided locations were in Orange County, but one location where the bikers allegedly purchased the drugs was at the Warren Hills apartment complex in Nyack, Rockland County. Authorities say they were then sold in Orange County.

Authorities say Smith, a paid lieutenant of the City of Middletown Fire Department, has been charged with crimes including operating as a major trafficker as the alleged ringleader of both operations, working in tandem with Dunham.

Gamble and Michel, also charged with crimes including operating as major trafficker, are alleged to have been "profiteers" in the conspiracies to sell cocaine and narcotics pills. It is alleged that it was Gamble's role to provide cocaine to other members of the conspiracy, while Michel was to sell narcotic pills that were marketed to buyers as containing oxycodone but which actually contained fentanyl.

The pills were colored, stamped, and marked to appear to be oxycodone pills.