Daytona Beach,FL,USA (February 27, 2019) BTN — A federal jury has found a Key West man guilty of conspiring with members of the Pagan’s Motorcycle Club to deliver methamphetamine to the club members in Daytona Beach and his hometown.

The verdict in the trial of Keith Kirchoff, 41, came Tuesday and now he faces a maximum of life in prison for conspiracy to distribute methamphetamine and possession of a firearm in furtherance of a drug trafficking crime, according to a statement released Wednesday by the U.S. Attorney’s Office. 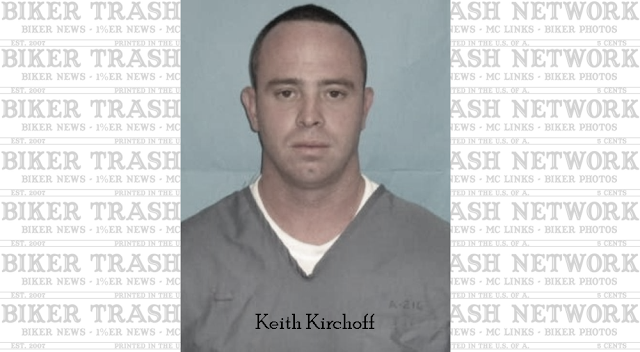 A sentencing date has not been set. Kirchoff, who was indicted on Aug. 9, is the 19th person to be found guilty as a result of a joint FBI and DEA investigation into drug-trafficking organizations that supplied motorcycle clubs with methamphetamine in the Central Florida area, the release said.

Members of the Pagan’s Motorcycle Club were among people who have already pleaded guilty to charges of distributing methamphetamine.

The Pagan’s members were identified in an earlier release by the U.S. Attorney’s Office as Michael “Clutch” Andrews, 33, of Palm Coast and Brian “Sledge” Burt, 47, of Port Orange. Andrew “Yeti” Shettler, 33, of Palm Coast, was also indicted and identified as a member of the Thunderguards Motorcycle Club, which is affiliated with the Pagan’s, according to the U.S. Attorney’s Office.

Kirchoff is not a member of the Pagan’s or other motorcycle clubs, said William Daniels, spokesman for the U.S. Attorney’s Office. The case was investigated by the FBI, the DEA, the Florida Highway Patrol, the Volusia Bureau of Investigation, the Volusia County Sheriff’s Office and the Daytona Beach Police Department.