New York, NY (February 22, 2019) BTN — The word coming from Third Street is that the Hells Angels are selling their clubhouse (No. 77) between First Avenue and Second Avenue with a springtime move planned. According to public records, there's a Memorandum of Contract (the form preceding a contract of sale) dated this past Dec. 21 between Church of the Angels, Inc. (aka — The Church of Angels) and 77 East 3rd LLC . 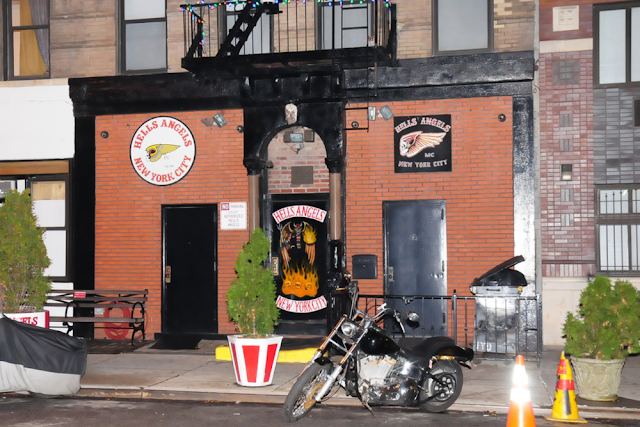 The document is signed by Bartley J. Dowling, president of the NYC Hells Angels chapter, and the purchaser, Nathan Blatter of Whitestone Realty Group. Attorney Ron Kuby, who has represented the Angels in legal matters through the years, said that he was unaware of any sale. "I have heard nothing about it," he said on the phone yesterday. He also said that he doesn't handle real-estate law. At this time, it's not known where the NYC clubhouse may be relocating or what the reasons are for doing so.

The Hells Angels have had a presence in 77 E. Third St. since 1969. They eventually bought the six-floor building, which includes their clubhouse and member residences, Realtor.com lists 14 units from Birdie Ruderman in the Bronx for a reported $1,900. The deed on file with the city from November 1977 shows the then-dilapidated building changed hands for $10. 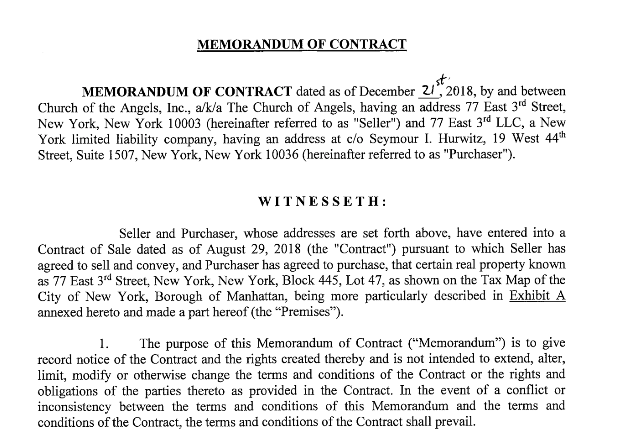 In 1983, chapter president Sandy Alexander took over ownership of the building. The deed from that time states that Alexander, his wife Collette and their family could live on the premises rent free. In addition, in the event that the building was sold, she would stand to receive half of the proceeds. This agreement was later the basis for a legal tussle in 2013 between the clubhouse and Alexander's family. (Sandy Alexander, who spent six years in prison for dealing cocaine, died in 2007.)

They are suing his second wife, Alison Glass Alexander, of Jamaica, Queens and his daughter from another marriage, Kimberly Alexander, of Needles, Calif. to prevent them from making a grab for the property. A source told the Post that the members have no immediate plans to sell 77 E. 3rd St. — which is on the periphery of New York University’s $6 billion expansion plan and in a once-crime ridden neighborhood where one-bedrooms now rent for $3,500 a month — but they wanted to clear up the "cloudy deed." 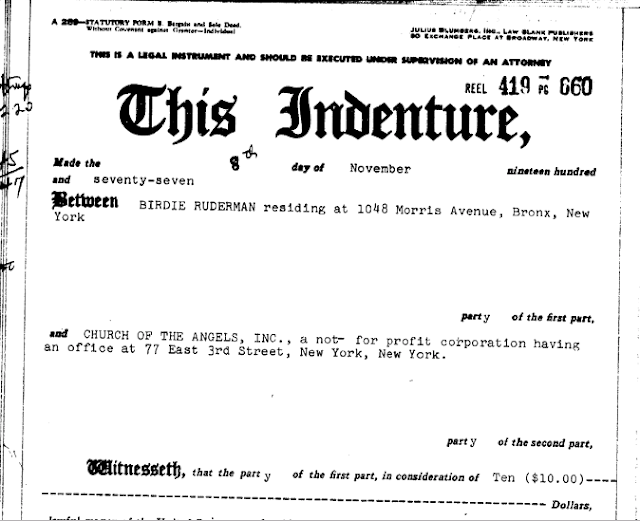 That deed was eventually reversed in April 2018, per public documents.

The U.S. government unsuccessfully tried to seize the building starting with a drug bust in 1985. The feds charged that the clubhouse was used to make drug deals. However, a jury ruled against the forfeiture in February 1994, per The New York Times. At another time we may note more of their legal run-ins here through the years. Most recently, in late December, the Post reported that a deliveryman was allegedly sucker punched by a member when he parked his car in front of motorcycles outside the clubhouse.


And here's a portion of the 1983 documentary "Hells Angels Forever" that highlights the Third Street clubhouse at the two-minute mark.