Ontario, Canada (February 8, 2019) BTN — It’s been two decades since the investigation began, 16 years since the charges were laid and a decade since the Crown began moving in court to keep the proceeds of crime seized by police.

But only now, 20 years later, a judge’s order has finally settled the loose ends left from a controversial police crackdown that all but dismantled the Outlaws biker club in Ontario. 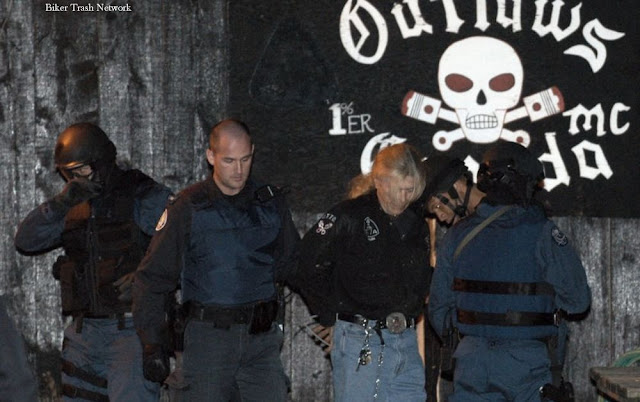 After all that time and effort, however, all that’s left are a few crumbs — far less than what it cost taxpayers and defendants to complete the litigation.

“We wouldn’t want to rush these things,” defence lawyer Gordon Cudmore, who represented the late Floyd Deleary in the Outlaws prosecution, said sarcastically of how long it took to finish the civil case.

Of the 47 bikers charged in the sweeping 2002 investigation, only Londoner Clifford Tryon, arrested in the raids but whose charges were later dropped, was still hanging in to get back seized property.

Tryon was a director and officer of a numbered corporation that owned the London and Windsor Outlaw clubhouses. He soldiered on after his fellow bikers bailed and fought for the remains of the club, arguing the Crown couldn’t lay claim to the items and that his Charter rights were breached.

At issue for Superior Court Justice Heather McArthur was what was left from six fortified clubhouses, including one on London’s Egerton Street, plus such items as petty cash, biker colours and a Nazi flag.

The courts ordered the clubhouses demolished in 2009, after they’d sat empty and fell into disrepair. 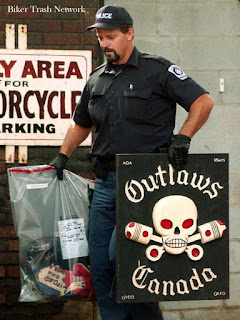 Once the sites were sold and the taxes and utilities paid up, all that was left was a mere $238.97 — only enough, as defence lawyer Scott Cowan said, to cover one fancy dinner.

That was forfeited to the Crown, along with $21.58 in change and $115 in bills found in the Egerton Street clubhouse and any other spare change lying around the other properties.

Outlaw vests, patches, jewelry and any clothing depicting the skull and crossbones logo weren’t returned. But a swastika flag signed by all the Outlaws, and other “white power” items and items for private or decorative use, were given back.

Tryon agreed the gun holsters, shotgun shells, other ammo, bear spray, throwing knives and bullet-proof vests shouldn’t be given back, but won his argument that a decorative knife and two swords should be.

Cowan said he figures the government shed no tears over how long the case took. Ontario’s Civil Remedies Act is “designed to make crime not pay,” he said.

“If it takes a long time to sort these things out, I don’t think the government is terribly aggrieved because that main message still gets through.” said Cowan, who represented one of the last two bikers in the criminal case, Luis Ferreira, where the charges were dropped.

The police had searched 50 sites and seized an avalanche of property. Most of the defendants gave up fighting for their property years ago, its value not worth the legal cost of the fight.

Ferreira gave up seven years ago trying to get back his truck and motorcycle, Cowan said. The truck, left sitting in a yard as the case dragged on, had basically “disintegrated.”

Cowan noted the standard of proof in the civil cases is different than in criminal cases, meaning different weight can be applied to the evidence.

The main witness in the case, a police agent who infiltrated the club, claimed there was criminal activity involving drugs, weapons and stolen goods. That witness’s evidence was challenged at a preliminary hearing where the criminal organization charges were ordered dropped.

Ontario’s attorney general revived the charges through what’s known as a preferred indictment.

As the case trudged on, Cowan and Toronto lawyer Jack Pinkofsky represented Ferriera and former national Outlaws president Mario Parente, the last two accused against whom charges were dropped in 2009 after the police agent said he wouldn’t take part in the trial.

The Outlaws breakup was seen as a major test of what were then new criminal organization laws.

None of the Outlaws had a trial, but a high-security courtroom was built in London for the case. The courtroom has since been used multiple times, including for the Bandidos massacre trial after eight bikers were executed in rural Elgin County over an internal club power struggle.