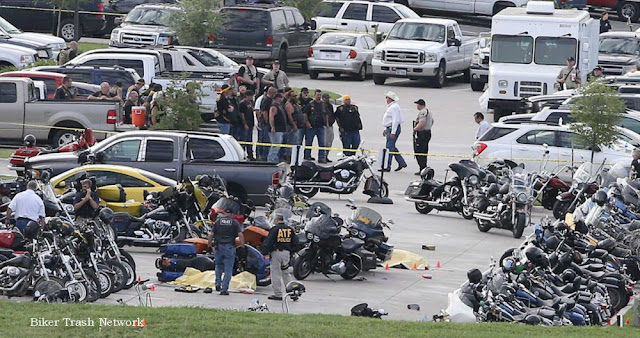 Special prosecutors Brian Roberts, Brian Benken, Feroz Merchant and Mandy Miller filed motions Monday to dismiss the first-degree felony engaging in organized criminal activity charges against bikers William Chance Aikin, Billy McCree and Ray Nelson. The motions to dismiss said, "Upon reviewing all the facts, circumstances and evidence, it is the state's position that no probable cause exists to believe the defendant committed the offense."

The team of special prosecutors dismissed the case against Hewitt resident Matthew Clendennen in April 2018. "I think, unfortunately, — and this is probably a poor choice of words — but it was simply a shoot-first-ask-questions-later mentality," Roberts said. "I can't imagine what (former McLennan County DA) Abel Reyna was thinking other than this was a big case and it was somehow going to be beneficial for him or his office."

Roberts, a former prosecutor who served in the special crimes bureau of the Harris County District Attorney's Office, said he had no problem with the first part of the process, which was to round up more than 200 bikers, identify and photograph them. He said the process was necessary to try to see who was involved and who were merely witnesses. "I do have a very serious problem as a lawyer with the wholesale charging of people without an investigation," he said. "They had plenty of time to conduct an investigation. They had plenty of time to do what they needed to do to find out who the parties needed to be in this harebrained scheme. It is just patently offensive to me.

"Justice is the sword and the shield. You had a number of folks who never should have been charged and whose lives have been turned upside down unnecessarily, and that is something you can't change. You can't take back what has happened over the last four years."

In the months after his defeat in the March 2018 Republican primary, Reyna dismissed the vast majority of the 154 pending indictments his office sought in the Twin Peaks shootout, which left nine dead and 20 injured. Reyna's office re-indicted 25 Twin Peaks defendants on different charges in May, with most being charged with riot and three being charged with murder and riot. District Attorney Barry Johnson, who took office in January, has said he and his staff are reviewing those cases to determine how to proceed.

Houston attorney Paul Looney, who represents Ray Nelson, said he agrees with Roberts. "What Brian said is long overdue. The defense bar has been saying the same thing for nearly four years. This gives a lot of credibility to what we have been saying, and I am very appreciative of them to go through all of the evidence thoroughly and to have the courage of their convictions when it came time to announce it. These people deserve vindication. It is long overdue. They have been treated horribly."

Roberts, who made it clear that he was speaking only about the four cases he and the others were appointed to handle, said that prosecutors bear a greater responsibility to ensure that justice is done. "Whatever justice means. Whether that means pursuing a prosecution, whether that means reducing a case, whether than means getting rid of a case, whether than means never charging a case," Robert said. "A prosecutor's job is not to put people in prison. It is to do justice. I don't think anybody can say that was done here back in 2015."