Mississauga, Canada (March 15, 2019) BTN — A massive turnout is expected for the funeral of Michael (Diaz) Deabaitua-Schulde, 32, a full-patch Hells Angels member who was murdered in broad daylight at a Mississauga strip mall Monday. All of Ontario's roughly 200 Hells Angels members are required to attend and Hells Angels charters from across the country must also send members, a source said. 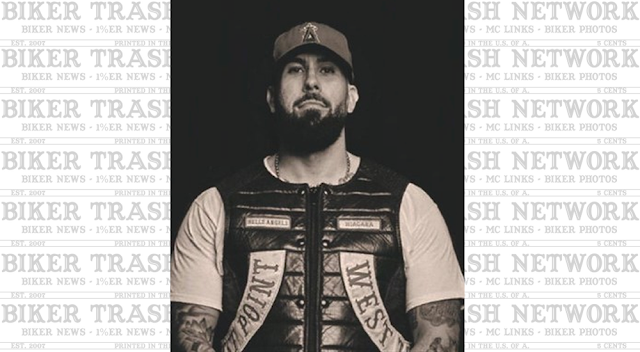 A Quebec man with Hells Angels ties is already in custody on first-degree murder charges and police have issued a Canada-wide first-degree murder warrant for another Montreal man who has a history of weapons possession, fraud and possession of false documents, and is awaiting trial for allegedly intimidating someone connected to the court system. The funeral of Deabaitua-Schulde, a father of two, is set for Saturday, March 23 at the Vescio Funeral Home in Woodbridge, according to the funeral home's website.

A GoFundMe page has also been set up in Deabaitua-Schulde's name. "God called Michael on Monday March 11, 2019, at the age of 32," his online obituary begins. "He will be forever missed by his loving spouse, Ashley and his children … He will be held dear in the hearts of his family, relatives, and many friends." As his funeral is being planned, police continue to hunt for Montreal fugitive Joseph Pallotta, 38. Deabaitua-Schulde was shot dead shortly before noon on Monday outside a gym in Mississauga at 700 Dundas St. E., near Cawthra Road. Peel Regional Police chief Chris McCord said that Deabaitua-Schulde was the victim of a targeted attack. Pallotta is considered armed and dangerous.

Peel Regional Police announced on Thursday that they have arrested two Montreal men and that Pallotta is their third suspect. None of the three suspects are members of biker gangs but they are linked to organized crime, Peel Regional Police acting Supt. Martin Ottaway said at a press conference on Thursday. Marckens Vilme, 28, of Montreal was also charged with first-degree murder for Deabaitua-Schulde's death, Peel Regional police announced on Thursday. Vilme has a lengthy criminal record that shows a long-standing association with a Montreal street gang called the Ruffriders, and connections to Quebec Hells Angels.

The Ruffriders are considered by police to be associated with a larger Montreal street gang called les bleus, who in turn are close to the Quebec Hells Angels. Vilme's record includes convictions for violence and drug trafficking in Pierrefonds and in the west part of Montreal island. Vilme was sentenced to 21 months in jail for drug trafficking in June 2011 and eight months for conspiracy and extortion in February 2014. He also has an outstanding assault charge in Laval.

A third suspect Jonathan Martinez-Seyes, 27, was charged on Wednesday night with complicity after the fact. Deabaitua-Schulde was a member of the Niagara Region charter of the Hells Angels. One of his fellow Niagara Region members has been seen in Montreal several times recently, according to a Quebec source. Peel Regional police recovered a burned blue Honda Civic at the corner of Rymal Road and Tomken Road shortly after the murder on Monday.