Dayton, Ohio, USA (March 17, 2019) BTN — Former Outlaws Motorcycle Club leader Harry ‘Taco’ Bowman’s was laid to rest at Bear Creek Cemetery Saturday. About a thousand members of the club came into town to honor their one-time leader. The ceremonies started at the Montgomery County Fair Grounds with a 24 hour viewing on Friday followed by a funeral service and burial Saturday morning. “There were thousands of people here today. We had a thousand on motorcycles, we had cars everywhere,” said Montgomery County Sheriff Rob Streck. 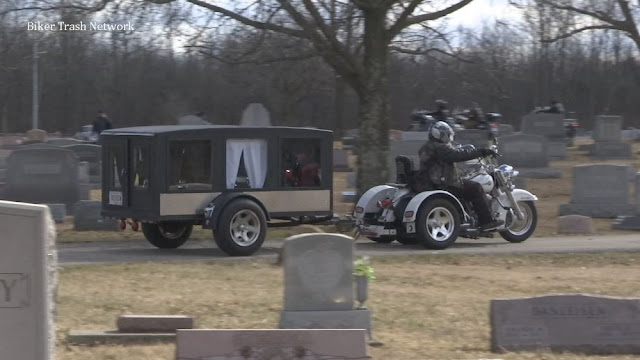 The ride from the Fair Grounds to the cemetery proved to be a difficult task for law enforcement. Streck said deputies from his office, Trotwood Police officers, and troopers from Ohio State Highway Patrol made it as smooth as they could.

He apologized for the inconvenience it posed to other drivers, though. “At one point west third street from the 49 connector was at a standstill because there were so many vehicles trying to turn onto union to get to the cemetery,” he said. Bowman was the club’s international president in the 1990’s and died in federal prison from cancer.


He at one point was on the FBI’s top ten most wanted list. According to FBI reports, Bowman was convicted on multiple murder charges, including ones stemming from contracted bombings on rival clubs. 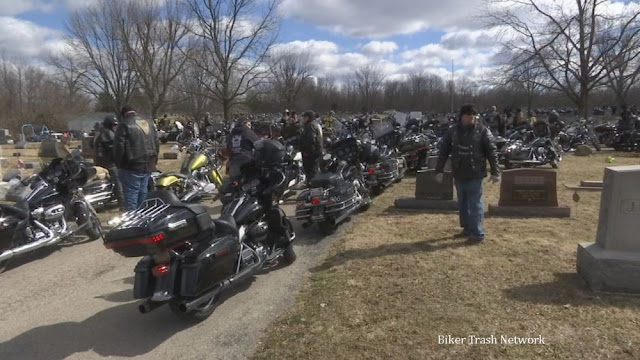 The Outlaws are a 1-percenter motorcycle club. That means they separate themselves from the American Motorcyclist Association's statement that 99-percent of all motorcyclists are law abiding. Despite the club’s reputation, Funeral Director Kevin Rogers said they were respectable. “We've actually done about four other Outlaw funerals,” Rogers said. “Every time I've ever worked with them they've been nothing but great.” Bowman is from Michigan and died in North Carolina.

He chose Dayton as his final resting place. “The answer they gave me as to why they chose Dayton is because Bear Creek Cemetery is where a lot of his outlaw brothers were already buried,” said Rogers.
Email ThisBlogThis!Share to TwitterShare to FacebookShare to Pinterest
Labels: 1%er News, Biker News, Colors, Motorcycle, Motorcycle Club, Outlaws MC
Newer Post Older Post Home