Albuquerque, N.M., USA (March 29, 2019) BTN — It's a bold sign: "a gang-free zone, wearing of 'colors' not permitted." It's hanging at the front entrance to Mariscos Altamar at Coors and I-40.
"It is shocking to see that," said Raymond Gallegos. The sign references "gangs," but the symbol represents what is referred to as the "one percenters," also known as bikers who give the community a bad name. "They watch one television show and we're almost all criminals," said Gallegos. 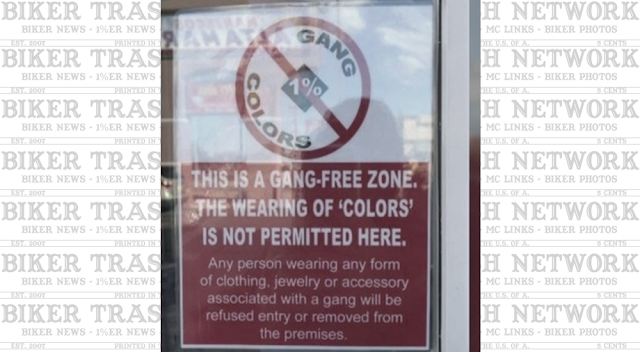 Sign posted on the entrance to Mariscos Altamar restaurant

Raymond Gallegos is with the New Mexico Motorcyclists Rights Organization. He said the sign is meant to kick out bikers like himself wearing his cut. "What I'm wearing would be considered colors, it's an insignia that represents the club that I'm in," he said. The majority of bikers are in 'bike clubs,' not gangs, and are good people raising money for charities and helping those in need. "To say that we're all gang members, that's a very broad spectrum brush," said Gallegos.


He said this isn't the first time. Ojos Locos in Uptown confirms it has a sign inside too. The NMMRO sends out lists to its members, showing which establishments are "no colors welcome," including places like the Santa Ana Casino and the Cottonwood Mall. "I've been asked several times from managers or staff that they don't allow gang colors," he said.

Albuquerque Police Department records confirm that earlier this month officers were called to Mariscos Altamar for an incident involving a "biker gang," but no police report was ever filed. The manager would only say the owner told him to put up the sign on Friday.


KRQE News 13 did reach out to both Mariscos Altamar and Ojos Locos. Neither would speak to us on camera or comment on why they put up their signs. Gallegos says signs like this are a civil rights violation under the first amendment, but he says it would cost thousands of dollars to take a case to civil court.