Barcelona, Spain (March 10, 2019) BTN —  The Mossos d'Esquadra of the Criminal Investigation Division of Sabadell (Barcelona) arrested 19 people on 26 February as part of a police operation aimed at illicit activities carried out by members of the Hells Angels Motorcycle Club, in its headquarters in Barcelona and Tarragona.

In a statement on Sunday, the Catalan police has reported that the investigation relates to crimes against public health, robbery with violence, coercion, extortion, injury, possession of weapons and membership of a criminal organization . In March 2018, the Central Unit of Criminal Bands learned of an incident in which five members of the band violently broke into a bar in Cambrils (Tarragona), where members of a rival club were violently assaulted with chairs and objects. 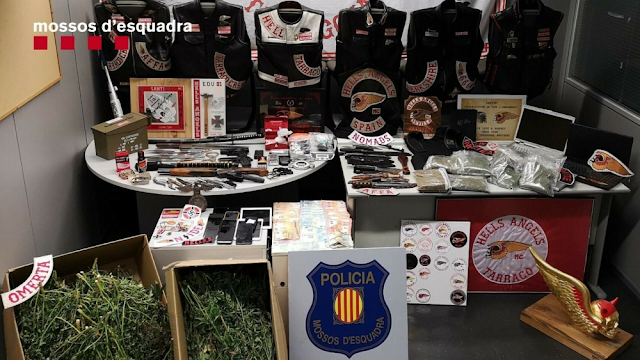 The investigation showed that the members of this band in Tarragona "formed a perfectly structured and hierarchical criminal organization with the purpose of trafficking drugs and committing violent crimes." The agents also corroborated that the club applied a strict internal discipline against the members of the group that violated the norms of the organization.

The Hells Angels MC of Tarragona, which have members in Catalonia, Aragon and the Basque Country, exercised violence and intimidation towards other clubs of bikers present in their territory to which they had submitted to their control and supervision.

Regarding drug trafficking, agents showed that the club had marijuana crops in real estate that were rented expressly for this activity and that other members of the club did in their own homes. They also trafficked cocaine, both from the club's headquarters and through businesses related to its members, and it was detected that the headquarters of Hells Angels MC in Barcelona functioned as a point of sale for cocaine.

On February 26 the Mossos made a police device with 13 entries in the headquarters of Tarragona and Barcelona, ​​as well as in homes of the principal investigated and establishments related to the cultivation and trafficking of narcotic substances. Arrested 19 people in Catalonia and the Basque Country , both members of Hells Angels MC and other people related to the organization.

At the Tarragona headquarters, various narcotic substances destined for trafficking were confiscated, and a firearm , abundant documentation, computer equipment and electronic devices with information on the operation, structure and internal regulations of Hells Angels MC, as well as objects and material were intervened. related to the organization. The investigation continues open, the detainees went to court on February 28 and the judge decreed imprisonment for two of those arrested and released with precautionary measures for the rest.