Hells Angels ride off from their clubhouse

New York, NY (March 22, 2019) BTN — The Hells Angels have been vacating their East Village clubhouse and residence in recent days, an exodus spurred by the apparent transfer of their six-story building to a buyer. The new owner, Nathan Blatter, president of the Whitestone Realty Company in Brooklyn, said he was not available for immediate comment. 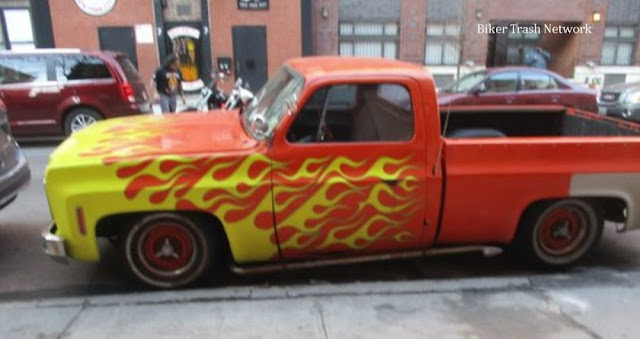 So where are the Hells Angels Motorcycle Club heading on their motorcycles after 50 years at 77 E. Third St.?

“We don’t know,” said a lean, member of the famed motorcycle club. As he moved packing material out through the clubhouse door over the weekend, he shielded his face from this reporter’s camera. Two motorcycles belonging to the Hells Angels were parked outside. Across the street was a pickup truck with and the words “Hell Bound” on its tailgate. 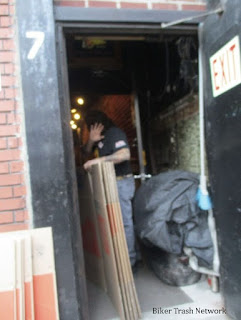 Last Thursday, The Villager rang the bell on the clubhouse door repeatedly after learning the Angels were leaving. Finally, a muscular biker of middle age came outside, his face nearly covered by a sock cap and huge sunglasses.

“No pictures,” he said, declining a request to pose for a photograph. “But you can take photos of the clubhouse if you want.” Was he going to miss it? “Of course, I’m going to miss it,” the black-clad biker replied as he walked west toward Second Ave.

The building has some distinctive touches. The ground floor’s red-brick facade bears the Angels “death’s head” insignias. There’s also plaque commemorating deceased club president “Big Vinnie” Girolamo, along with his motto, “When in doubt, knock ’em out.” The rotund biker died in 1979 before he could stand trial for allegedly throwing his girlfriend Mary Ann Campbell off the roof of the clubhouse to her death, reportedly because he believed she was an F.B.I. informant.

The federal government tried for years to shut down the clubhouse under a 1984 law that allows seizure of properties used for drug trafficking. In 1985, it was one of 12 “H.A.” hangouts raided by F.B.I. agents across the country. The G-men arrested 15 New York City members and confiscated drugs like cocaine.

The incident and the resulting convictions became part of an unsuccessful 1994 civil lawsuit by the government to take over the East Village clubhouse. All that, of course, was a long time ago. Several newcomers to the East Village seem to revere the Angels as heroes.

Three teenage female students who live in a dormitory run by the New York City Conservatory for the Dramatic Arts, at 81 E. Third St., said they would miss the bikers’ presence on the block. “I won’t be able to tell my friends anymore that I live next door to the Hells Angels,” one said, plaintively.

Nina Holton, 18, a Barnard student who was photographing Angels motorcycles on Saturday, said her mother lives on E. Third St. “She’s upset and sad that they are leaving,” Holton said. “She feels they added character to the neighborhood and now they’ll be replaced by some developer who’ll build condos.”

Holton believes the Angels helped keep the neighborhood safe and provided a sense of community. “I’d pass the clubhouse late at night, and a couple of them would be outside and they’d nod,” she recalled. “They were like eyes on the street.”

Others on the block are clearly terrified of them.

“They’re known for being menacing and they cultivate that image,” said a longtime block resident who asked only to be identified as a community activist. She claimed the Angels had “assaulted” a friend of hers and her boyfriend’s.

“I try to stay as a far away from them as possible,” she said. “It’s a myth that they make neighborhoods safe.” The woman noted that the Angels have become known recently for “ridiculous disputes over parking spaces and their stupid cones” used to reserve public spaces as their own.

“One of them shot someone in the stomach over a parking cone,” she said. She was referring to now-deceased Angel prospect Anthony Iovenitti, who was accused of shooting David Martinez, 25, in the early-morning hours of December 2016. A rumble erupted erupted after Martinez had gotten out of his Mercedez- Benz to move an orange cone blocking his car’s way. Assault and weapons possession charges were dismissed against Iovenitti after he died at 52 of an aneurysm during a motorcycle trip in 2017. 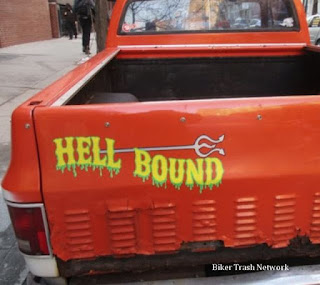 Captain John L. O’Connell, commanding officer of the Ninth Precinct, said there were “no interactions” with the club since his arrival last year “except for one short fight.”

In that instance, a 22-year-old deliveryman was sucker-punched in the face for parking in front of the clubhouse in late December 2018, according to the Daily News. O’Connell noted that his cops have taken away the Angels’ cones “because they’re not allowed to reserve spots on a public street.”

Criminal defense lawyer Ron Kuby has represented members of the club for years. He dismissed claims by some in law enforcement that the Hells Angels are into rackets and operate like organized crime.

“Think of it as a church,” he said of the group. “Members of clergy who violate the law don’t make the church a criminal enterprise.”

The New York City Hells Angels are actually incorporated in New York State as the Church of the Angels, a nonprofit religious organization. That name was used when club members purchased the property in 1977, for a reported $1,900. The moniker was used again last year in a preliminary memorandum of contract to sell the property to 77 East Third LLC, a limited-liability company linked to the aforementioned Nathan Blatter, EV Grieve reported last month. A 2013 court dispute over a deceased Angel president, Sandy Alexander, who had held title to the deed, was settled last year, apparently leading to a sale.

Kuby said he doesn’t know the buyer or the club’s current president “and I have no authorization to speak to the press with regard to the business sale.” He also couldn’t provide a “nose count” on the number of members in the club. He only said that most of them are just “looking to be left alone and to ride motorcycles with their colleagues.”