Butner, N.C. (March 3, 2019) BTN — Midwest biker baron Harry (Taco) Bowman died behind bars of cancer over the weekend at 69. The legendary Outlaws Motorcycle Club President ran his empire from Detroit and brought the Outlaws to prominence nationwide, presenting a formidable challenger to Hells Angels founder Ralph (Sonny) Barger as America’s most powerful biker boss at the apex of his reign in the 1990's. 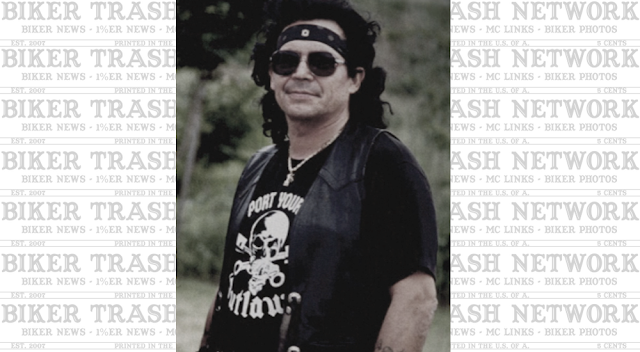 Called “Taco” for his dark complexion and resemblance to someone of Hispanic heritage, Bowman, simultaneously feared, beloved and respected, was serving a life prison sentence in a federal correctional facility for racketeering and murder. He was found guilty at a 2001 trial in Florida, many of the offenses charged being connected to beatings, bombings and coldblooded slayings ordered during the Outlaws ongoing war with Barger’s West Coast-based Hells Angels. Barger and Bowman both took out murder contracts on each other.

Bowman was a gangland chameleon and the consummate underworld politician. He forged strong ties to Detroit’s Italian mafia and Eastern-European criminals in the area and would often shed his long hair, beard and Outlaws “rocker” for a businessman’s cut and three-piece suit in order to build valuable relationships in the white collar world. Living in a mansion on “Mafia Row” in posh Grosse Pointe Park, Michigan, he was often chauffeured around town in a custom-designed Rolls Royce and sent his children to an exclusive private school.

When he was elected International President of the Outlaws in 1984, Bowman moved the club’s headquarters from Chicago, where the club was established, to his hometown of Detroit and spearheaded a campaign to take over all of Florida, previously and somewhat currently considered a biker’s no-man’s land, a place where everybody can operate free of territory disputes. A magnetic leader, Bowman also pushed for the diversification of Outlaws street rackets, expanding from an investment structure based primarily on narcotics to a portfolio boasting gambling, loansharking and extortion to augment the drug proceeds.


Upon being indicted in 1997, Bowman went on the run. With the help of the Detroit and Chicago mobs, he avoided arrest for two years. Making it on to the FBI’s Ten Most Wanted List, he was eventually apprehended in a suburb outside Detroit in the summer of 1999. Years earlier, he had beefed with the Detroit mafia over gambling turf but finessed his way out of a murder contract placed on his head and quickly repaired his bond with local mob chieftains.