Milliken, Colorado (March 22, 2019) BTN —  The attorney for a member of the Hells Angels motorcycle club argued on Thursday his client did not intend to kill a Milliken police officer when he fired on her during a high-speed chase in the summer of 2017.

Colorado Public Defender Brian Connors represents John Lockhart, 38, of Eaton, who is accused of two counts of attempted first-degree murder, among others. The charges stem from separate shootings during the early morning hours of June 11, 2017, in Greeley and Milliken. 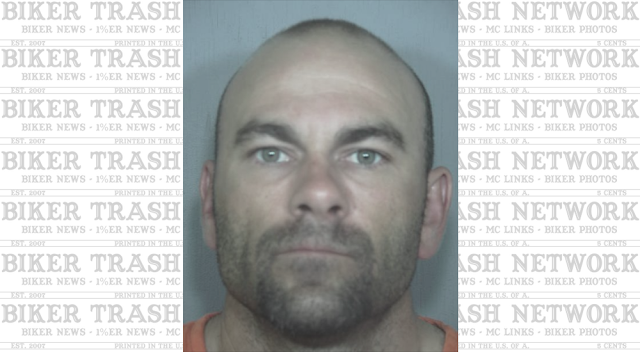 On Thursday, a Weld County jury heard closing arguments in Lockhart’s case, during which Connors argued for a conviction on a lesser charge of attempted manslaughter, saying it was impossible for Lockhart to shoot to kill Milliken officer Katherine Lines in the midst of a high-speed chase.

Lines encountered Lockhart and his passenger, Amber Eaton, about 1:30 a.m. June 11, 2017, as they sped into Milliken on his Harley Davidson motorcycle. When Lines attempted to pull Lockhart over, he accelerated to speeds exceeding 100 mph and fired three shots at her cruiser. One of those bullets entered the cruiser near the driver’s side headlight. Lines was uninjured.

“Mr. Lockhart was controlling the bike with one hand, shooting with his left hand around a passenger, while also going over 100 mph,” Connors said. “What kind of aim, what kind of accuracy, what kind of intent can you have?

“There is plenty of evidence Mr. Lockhart fired a gun that night, but no evidence he intended to kill officer Lines.”

Connors explained to the jury the difference between an attempted first-degree murder conviction and an attempted manslaughter one comes down to whether or not Lockhart acted with intent or acted recklessly when he squeezed off three rounds in Lions’ direction. “Mr. Lockhart’s actions in Milliken are the very portrait of what it means to act recklessly,” Connors said. “The only way he could have acted more recklessly is if he was blindfolded.”

Weld Chief Deputy District Attorney Tony Perea painted a simpler picture of the events during his closing argument, saying Lockhart could only have had one intention in mind when he pointed a gun at another person and pulled the trigger. In officer Lines’ case, Perea cited a couple pieces of damning evidence against Lockhart that was brought up at trial.

The first was a portion of Lockhart’s taped interview with police following his arrest in June 2017. During the interview, Lockhart tells a Greeley police investigator he believes driving is a right, not a privilege, and that he doesn’t believe in pulling over for anyone.

The second piece of evidence came from a recorded telephone conversation to a friend Lockhart made from the Weld County Jail about a month after his arrest. “I did shoot at that (expletive),” Lockhart says in a snippet of the conversation played during Thursday’s hearing. “Her dash cam is gonna show that she tried to hit me, twice.”

Perea noted Lockhart made the decision to not only run from Lions after she activated her emergency lights, but to also shoot at her during the chase. “He (Connors) wants to argue that shooting at a police officer is reckless,” Perea said. “Does, ‘I did shoot at that (expletive)’ sound reckless? Shooting three times at a police officer is not the definition of reckless.”

Prior to the incident in Milliken, Lockhart was involved in a shooting with Faustino Garcia while driving on 8th Avenue through Greeley. That shooting occurred about 12:30 a.m. June 11, 2017, about an hour before Lockhart’s chase with Milliken police.

Lockhart is accused of firing seven times at Garcia, who was driving a Ford SUV. Garcia admitted at trial he had been drinking at the White Horse Bar in Garden City and that the shooting was the result of a road rage incident.

The jury began its deliberations shortly after 10 a.m. A verdict has not yet been announced.