Nova Scotia, Canada (October 22, 2018) BTN — A justice of the Nova Scotia Supreme Court has reserved his sentencing decision in the case of three members of the Bacchus Motorcycle Club who have been convicted of extortion and intimidation.

In convicting Patrick Michael James, 51, Duane Jamie Howe, 49, and David John Pearce, 44, Justice Peter Rosinski also said that the Bacchus motorcycle club is a criminal organization, the first time that designation has been made in Nova Scotia. 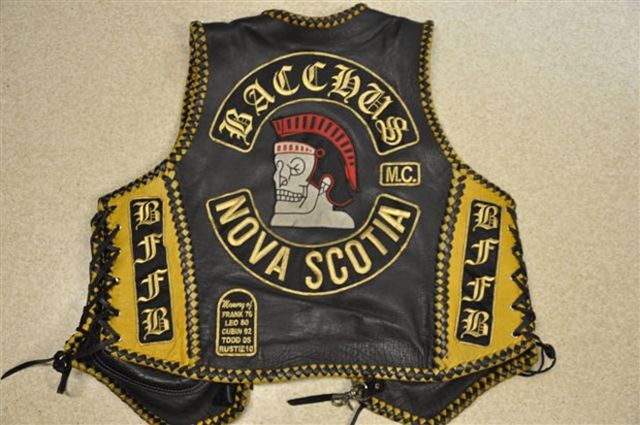 The men were convicted in a trial this summer. The convictions stem from incidents in 2012 involving a man whose identity is protected by a publication ban.

The man tried to open a chapter of the Brotherhood Motorcycle Club in Nova Scotia. It is not an outlaw gang, but it uses vests and patches similar to those worn by outlaw riders.

When the Bacchus members saw social media posts of the Brotherhood club, they ordered the man to disband the club and destroy the patches. He was to provide proof by showing the shredded patches to Bacchus members.

Later, Pearce and Howe spotted the man at a Bikers Down event. They confronted and threatened him, prompting the man to sell his motorcycles and install a panic alarm in his home.

In his sentencing submissions, Crown prosecutor Glen Scheuer argued that the criminal organization designation was one reason the sentences should be substantial. He recommended a five-to-six year sentence for James and four-and-a-half to five-and-a-half year sentences for Howe and Pearce.

Scheuer submitted photographs taken from Pearce's Facebook profile which show the man wearing T-shirts and sporting decals on his motorcycle that were supportive of motorcycle gangs.

Scheuer said the social media posts included the phrases "Police and government are very corrupt" and "All cops are bastards."

Patrick MacEwen, Pearce's lawyer, said that wearing clothing that supports these groups is not a crime and the clothes are readily available for purchase by any member of the public.

MacEwen also said that Pearce is showing a Bacchus tattoo with the dates 2010 to 2012 in one of the photos introduced by police. MacEwen said any member who leaves the gang in good standing must put an end date on his tattoo and that's what his client did.

MacEwen and the other two defence lawyers also pointed out that all three men have avoided any further run-ins with the law in six years it has taken the case to make its way through the courts.

He recommended a sentence of six months for Pearce, who was the only one of the three to accept the judge's invitation to address the court.

"Ever since when this happened I do regret that it happened," Pearce said. The Crown had argued that all three men showed no remorse for their crimes.

Trevor McGuigan, the lawyer for James, recommended a two-year sentence for his client.

McGuigan said James has been taking care of his father and breeding rare dogs, while avoiding any further criminal activity. McGuigan said there was no physical violence in this crime.

Pat Atherton represents Howe. He said his client should be eligible for the shortest possible sentence.

Atherton said if it wasn't prohibited by case law, he'd be arguing that Howe get a sentence in the community. Instead, he suggested a one-year sentence would be sufficient.

He questioned a forfeiture order the Crown had requested, saying there was no proof some of the items seized from Howe's home were associated with any crime.

Rosinski will hand down his decision Nov. 7.