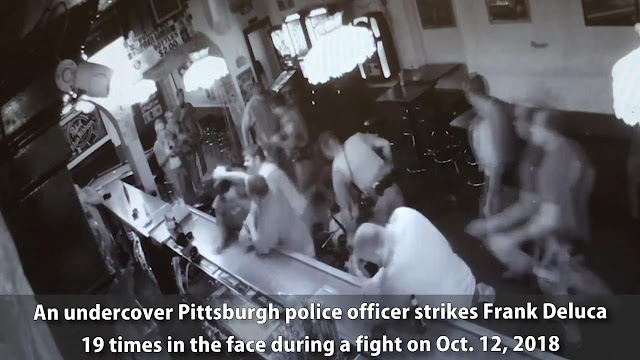 The attorney for one of the Pagan's members charged in the fight contends the police officers were drunk and started the fight because the cops didn’t like how the motorcycle club members were dressed.

“Our position is that my client was not engaged in any criminal activity, was not the subject of an investigation, but rather was the subject of drunk police officers who didn’t like the way they were dressed,” said Lee Rothman, the attorney for Frank Deluca, who faces charges of aggravated assault, conspiracy and riot along with three others of the Pagan motorcycle club.

Security footage from inside the bar also shows one undercover officer punching Deluca in the head at least a dozen times. The fight occurred about 12:30 a.m. on Oct. 12 at the South Side bar. Four Pagans fought with several undercover Pittsburgh police officers who were at the bar investigating a drug complaint, authorities have said.

Public Safety spokesman Chris Togneri said the department cannot comment on ongoing investigations, though investigators are reviewing all video footage. The incident is being reviewed by the Office of Municipal Investigations and the Citizens Police Review Board.

A court affidavit from Stephen Kopy indicates that the undercover officers came in about 7:30 p.m. Oct. 11 and identified themselves as construction workers. They ordered alcoholic drinks, Kopy wrote. The Pagans came in about 11:30 p.m. and sat at the opposite end of the bar.

“On several occasions, the undercover officers called me over and made statements indicating that they had an issue with the bikers at the other side of the bar,” Kopy wrote. “Each time I discouraged them from taking action.”

Twice before the fight, one of the officers spoke to the Pagans, but Kopy was not certain what was said, he wrote in the affidavit. Shortly before 12:30 a.m. Oct. 12, one officer identified himself as an undercover officer and told Kopy “he liked me and did not want to see anything happen to my bar,” according to the affidavit.

One officer asked Kopy what he and the bikers had spoken about, Kopy wrote, and wanted to know if he was associated with the Pagans.

Video from the bar shows a conversation between the undercover police and Pagans beginning cordially. It shows Deluca shaking the hands of two of the officers. Rothman said the incident escalated with officers who “were highly intoxicated and agitated because members of a motorcycle club came in dressed a certain way.”

Rothman contends that the video shows the officers drinking for hours beforehand. He said he counted one who “had four Jack Daniels on the rocks – full glasses – within one hour and never stopped drinking.”

Deluca, Michael Zokaites, Bruce Thomas and Erik Heitzenrater have been charged in connection to the fight. A preliminary hearing scheduled for Tuesday was continued until Nov. 6.

The footage shows one officer holding Deluca against the bar while an undercover detective punches him repeatedly in the face. Rothman said Deluca has damage to his orbital bone and elbow and, as a union electrician, is now unable to work.

Kopy’s affidavit also covered the aftermath of the brawl.

Some time later, two of the undercover officers returned to the bar with three or four uniformed officers, a lieutenant and a detective, he wrote.

The lieutenant asked why Kopy did not have a dress code for his bar, and he responded that he never needed one.

That would have led to the bar being shut down, Kopy said the lieutenant told him, and he would have to “live with a dead customer on my conscience,” according to the affidavit.

Later, two of the undercover officers asked Kopy if he’d outed them as cops to the bikers, according to the affidavit. Kopy told them he’d been unaware they were law enforcement until just before the fight.

One week later, a city detective came to remove the security camera hard drive and make a copy, Kopy wrote. Kopy had also provided copies to attorneys for the bikers and the Pittsburgh Police Citizens Review Board after they requested them.

The detective told Kopy that during the process the data was lost and the security system would not work.

“Upon stating that the data might be lost, I informed that the (review board) and the bikers’ defense attorney had copies to which (the detective) sounded surprised to hear such news,” Kopy wrote.

Kopy’s affidavit was signed Monday, Oct. 22, along with a notary.