Montreal, Quebec, Canada (October 3, 2018) BTN — Three full-patch members of the Hells Angels, including one of the clubs founding members in Canada, and a member of the Repentigny police pleaded guilty to various drug trafficking charges at the Montreal courthouse on Wednesday.

Twenty people in all appeared before Quebec Court Judge Daniel Bédard inside a fifth floor courtroom that was humming with activity throughout the day as almost every remaining case in Project Objection, a major investigation into three drug trafficking networks run by the Hells Angels, came to end only six months after arrests were made in April.

“I’m very impressed,” Bédard remarked at one point as several drug dealers pleaded guilty to charges that will result in them serving time inside federal penitentiaries. 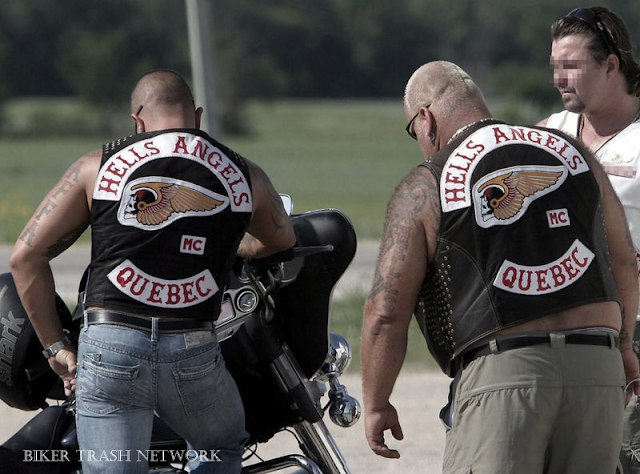 The person who ended up with the longest sentence, a six-year prison term, was Stéphane Maheu, 47, a member of the gang’s South chapter. He had been sought by members of the Escouade nationale de répression contre le crime organisé (ENRCO) since April, but suddenly emerged at the Montreal courthouse on Wednesday.

Despite having been a wanted man for months, Maheu was able to walk around the courthouse freely before he appeared before Bédard and admitted he led a network that sold cocaine and methamphetamine in different parts of Quebec.

He pleaded guilty to three counts of drug trafficking, two counts of conspiracy, and a gangsterism charge. According to a joint statement of facts read into the court record, a group run by Maheu also sold nearly 300,000 methamphetamine pills in the Outaouais region while under investigation. The Hells Angel also assigned two men to run a drug trafficking ring in Cowansville and Granby, but one of the men turned out to be a civilian undercover agent who was working for ENRCO. Maheu received “a tax” on the 42,000 meth pills and 177 ounces of cocaine that were sold in the Eastern Townships.

Maheu was taken into custody as soon as Bédard accepted the guilty plea.

“Everything is perfectly clear,” Maheu said when Bédard asked him if he understood what he was admitting to.

Michel (Sky) Langlois, 72, one of the first men to ever wear the Hells Angels logo in Canada when he became a founding member of the Montreal chapter in 1977, was also done in by the same undercover agent. On Aug. 9, 2017, Langlois and Maheu met with the agent at La Medusa, a restaurant on Drummond St., to discuss the distribution of drugs in the Outaouais region. The agent learned that Langlois claimed to have title over drug trafficking in Petite Nation, a regional county municipality in the Outaouais region and was partners in the nearly 300,000 meth pills Maheu sold as well as six kilograms of hashish.

Langlois was sentenced to an overall prison term of 58 months. 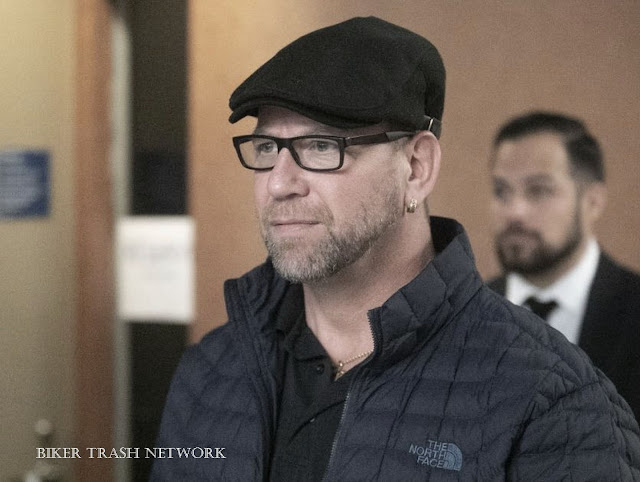 When Bédard asked him if he understood what he was admitting to the septuagenarian biker said “yes” in a long and drawn-out way that left Bédard unimpressed.

“Yeah, yeah,” Langlois said when the judge asked him a second time.

The same undercover agent met with Louis Matte, 52, the other Hells Angel who pleaded guilty on Wednesday, on Oct. 17, 2017 to discuss drug trafficking in Ontario near the Quebec border. Matte gave the agent a sketch of the territory he controlled in Ontario and the agent agreed to pay him a tax on all the meth pills he sold on Matte’s turf. The agent ended up paying Matte $22,000 over the course of four meetings.

Prosecutor Marjorie Delagrave and defence lawyer Gilles Doré made a common suggestion that Matte should be sentenced to a 22-month prison term. Doré asked Bédard to delay sentencing the biker until January because a close relative of Matte’s is very ill.

The last person to plead guilty on Wednesday was Carl Ranger, a member of the Repentigny police who was suspended following his arrest this year. Ranger met with the undercover agent in August 2017 and asked if he could borrow $6,000. The agent said the loan came with a cost and asked Ranger to look up a licence plate number for him in a police database. While on duty, on Oct. 3, 2017, Ranger handed the agent the information he was looking for in exchange for $1,100. Later on, in February, Ranger offered to transport 10,000 meth pills from Lachenaie to Boucherville and returned with $10,000 from a drug dealer. He was paid $1,000 for his work.

Prosecutor Françis Pilotte asked that Ranger be sentenced to an 18-month prison term. His defence lawyer asked that Bédard delay his decision on the sentence until January as well.

Included among the people who pleaded guilty on Wednesday was Carmelo Sacco, a 36-year-old resident of Ste-Adèle who admitted to being the leader of a methamphetamine trafficking ring that operated in eastern Montreal and the southern part of the Lanaudière region.

Prosecutor Juliana Côté described how accounting records seized in Project Objection revealed the group led by Sacco sold more than 2.5 million meth pills and seven kilos of cocaine between Oct. 7, 2017 and Feb. 18 of this year. The group is estimated to have made $1.7 million in sales during the same period. Sacco was sentenced to an overall prison term of 53 months.