Washdyke, New Zealand (October 19, 2018) BTN — Some might see them as unorthodox but the Devils Henchmen MC say they're maturing as the Timaru club revs up to celebrate 40 years. They will mark the milestone this long weekend and say there's plenty of life left in the club - despite an ageing membership.

The club has gained notoriety over the years - specifically in the early 90s - when gang tensions intensified in South Canterbury, capturing national attention. On the eve of their birthday, club members maintain there have been misconceptions over the years. 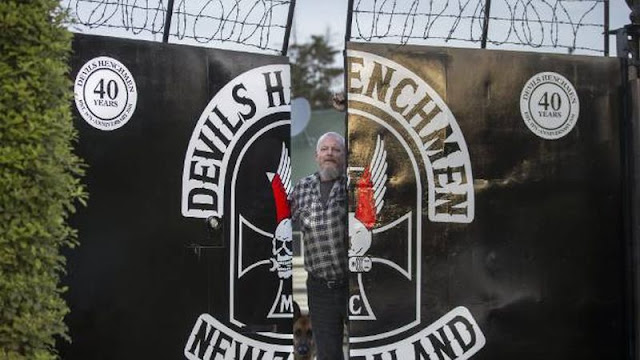 The Devils Henchmen are celebrating 40 years over Labour Weekend. Bryn Cox stands at the gates
of the club's Washdyke headquarters. 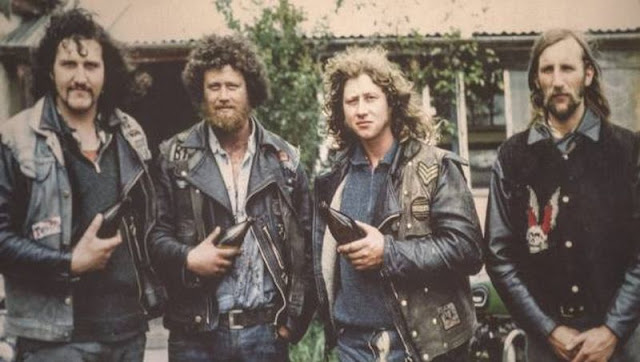 Founding members of the Devils Henchmen in 1978, from left, Smiley, Bird, Pogal and Woody 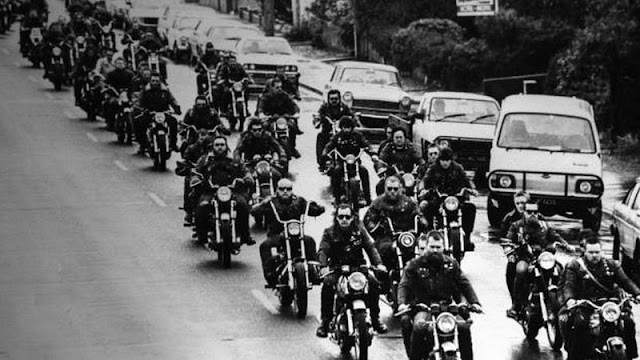 The Devils Henchmen MC during a ride in the 1970's.

Things have changed and he acknowledges periods of violence.

He said the club still can't get past the stigma of past problems. 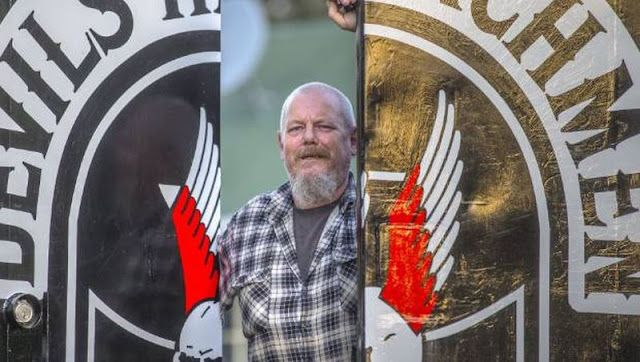 "We are not gang members, we are motorcycle club members."

The celebrations kick off on Friday with a ride around South Canterbury on Saturday, and live entertainment in the evening.

The club is expecting 300 to 400 people from around the country for the weekend, he said.

Some agencies are "still portraying that we are dirty bikie scum and drug dealers", he said. 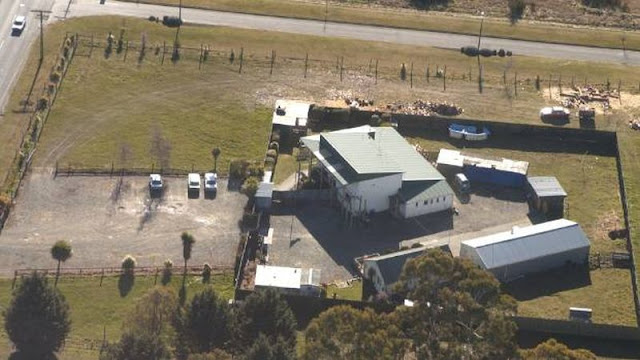 The club's Washdyke headquarters, photographed by John Bisset in 2004.
Cox has been a member for 19 years and started hanging around the club in 1981 - aged 19.

"These are my brothers, their wives and children are my family too."

At 40, the club is maturing and more savvy, he says. "We are tax paying members of the Timaru public."

The club still has a healthy membership, he said.

While protesters took to the streets of Timaru to drive the destructive and highly addictive drug methamphetamine out of the district last month, the Devils Henchmen banned the drug "very early", he said. "We seen what it was doing to other clubs."

Founding member John (Woody) Woodhams says the motorcycle club scene has changed a lot in the past 40 years. "It's a lot more streamlined and polished now. We used to sleep on the sides of roads, now it's the motel or camping ground."

Woodhams was introduced to motorcycle clubs in 1970 when he met a member of the Antarctic Angels in Invercargill and rode to Timaru where there were about five motorcycle clubs.

"It's all about motorcycles at the end of the day.

Woodhams acknowledges the club's ageing membership. "Some of us are getting so old now we are drawing a pension. "We are getting long in the tooth but we are still quite fit.

"If you can survive all the trouble of when you are young then you develop more tolerance at the end of the day." Tolerance is a virtue, he said. "Instead of smacking someone in the head you tend to give them a warning.

"All we can do is try to present a good image but you are fighting a tide."

Co-founding member Smiley said club membership is about trust and honesty. "The biggest one is respecting each other. "The whole scene has changed, we haven't changed as people. "We all stand for camaraderie and respect each other."

"It's not unusual for police to maintain contact with gangs or clubs when they have activities including celebrations and funerals. The Devils Henchmen have always had an event over Labour Weekend and we have always policed them."

Story and Photographs by: Al Williams and John Bisset