Fredericton, Canada (October 17, 2018) BTN — A Fredericton man and woman associated with the Hells Angels will be incarcerated for various drug and weapons charges.

Robin Moulton, 49, a member of the Hells Angels Motorcycle Club, was sentenced in Woodstock Court of Queen's Bench on Wednesday to four and half years for possession of cocaine with the intention of trafficking and possessing a drug press intended for trafficking purposes. 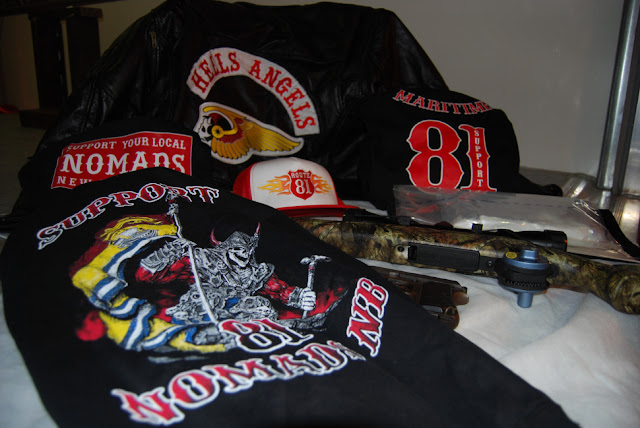 Marie Antonette Bugay, 41, described by the court as an associate of the Angels, was sentenced to 30 months in jail for possession of a loaded firearm without a license, possession of property obtained by crime and possession of cocaine.

Both plead guilty and, as a result, the Crown withdrew 10 additional charges, including illegal weapons possession and illegal weapons storage. At the time of the charges, the pair were in a romantic relationship and Bugay was associated with Moulton's company that sold clothing representing the Angels.

Both were sentenced together as part of a joint indictment stemming from their arrest on Aug. 22, 2017. They were apprehended by police as part of an ongoing joint-force investigation into motorcycle club activities in New Brunswick. Moulton, described by the court as a full-patch Hells Angels member for 12 years, sat next to Bugay during Wednesday's sentencing.

Moulton, wearing a black long-sleeve shirt with a grey goatee and his grey hair in a ponytail, kept his gaze lowered for most of the proceeding, occasionally sharing glances with Bugay, who wore a black shirt with a grey vest and black thick-rimmed glasses. 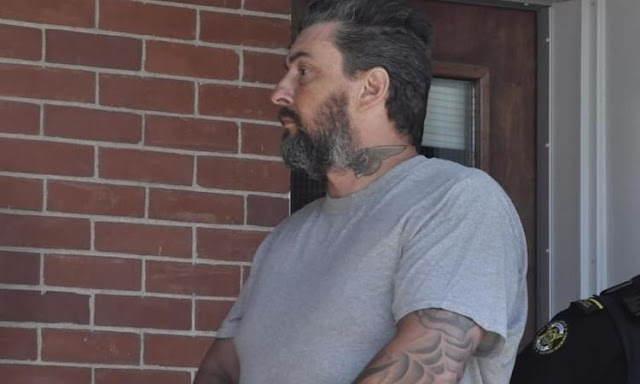 Robin Moulton being led away in handcuffs

Police determined that to be significant as it is often used as a tool to compress cocaine. After obtaining a general warrant, police covertly entered the Woodstock storage locker and found trace amounts of cocaine on metal blocks and the hydraulic press.

A second warrant allowed officers to covertly place a motion-activated camera inside the locker, and another warrant led police to find a 9-millimetre Berretta pistol stuffed inside a mitten. Police disabled the weapon before returning it. When the handgun was later analyzed, Bugay's DNA was found on the trigger.

The camera installed in the storage locker captured images of Moulton using the hydraulic press to compress a white powdered substance into bricks, which were then put into clear bags and placed into a duffel bag before leaving.

Police then followed Moulton, pulled over his rental car and, upon searching the vehicle, found 272.4 grams of cocaine at about 35 per cent purity valued at between $12,000 and $24,000. Moulton was arrested, leading to search warrants at his residence, Bugay's residence and the additional search lockers in Fredericton. Police found 28.9 grams of cocaine valued at between $1,400 and $4,000 at Bugay's home. She was later arrested while in her vehicle, where a duffel bag stuffed with $77,000 in cash was discovered. It was determined this to be the proceeds of crime.

In addition to prison time, both Bugay and Moulton are ordered to provide a sample of DNA for a databank. Bugay will be required to forfeit the $77,000 seized by police, is prohibited from owning a firearm for 10 years and was fined $600 in victim surcharges, while Moulton is banned for life from owning a firearm and was fined $400 in victim surcharges. Bugay had no prior charges before her arrest. The court mentioned that Moulton also had a prior drug possession charge from about 10 years ago.

Previous incarceration
Although not mentioned as a part of Wednesday's court proceedings, Moulton was previously sentenced to five years and four months in federal prison for trafficking cocaine and for possessing a prohibited or restricted weapon with ammunition.

Moulton was not to associate with anyone known or believed to be involved in criminal activity or associate with club members, including the Angels. He was also ordered to provide his parole officer with financial records as well as to reside at a specific place.