Ocala, Florida, USA (April 23, 2019) BTN — Marion County sheriff’s deputies scrambled to Sharkey’s Bar, located at 10163 SW Hwy. 484, shortly before 3:30 a.m. When they arrived, they found a man who had been shot in his right arm. He was then transported to AdventHealth Ocala for treatment.

A witness told deputies that 28-year-old Robert Patrick Wilson had been in an altercation with the shooting victim. The witness said he tried to break up the fight and the victim exited the bar and started walking toward his vehicle. He said he then heard two shots come from behind him in front of the bar and he took cover behind a vehicle, the report says, adding that the witness said he planned to sneak up behind Wilson and take the gun away. 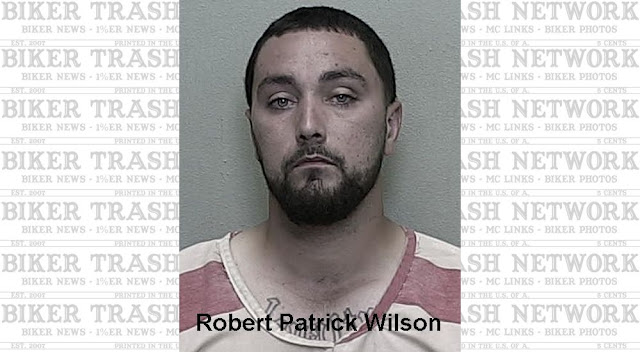 The witness said that Wilson was “freaking out” and allegedly saying, “I am part of the Outlaw gang” and “He is going to be dead in the parking lot.” He said Wilson said, “He’s a dead man” multiple times. And the witness said he tried to call Wilson down several times before the shooting took place, the report says.

The witness said he believed Wilson eventually had calmed down, so he went outside to speak with the victim, who was standing across the parking lot next to his vehicle. He said he then heard a gunshot and turned to see Wilson standing in front of the bar holding a gun, the report says.

The witness reported hearing two shots altogether and then called 911. And he said he saw a bartender and another bar employee surround Wilson and take him to the other side of the building.

Deputies also spoke with a bartender, who said she came out of a bathroom and saw Wilson holding a small handgun. She said he was waving it around and appeared to have the slide in the locked-back position. And she said she followed Wilson as he ran to the other side of the bar to make sure he didn’t leave, the report says.

After two other witnesses told the same account of the shooting, a sheriff’s K-9 deputy responded to the bar and his dog located a black-and-silver SCCY 9mm handgun near where Wilson had been detained. It had three rounds in the magazine, one round in the chamber and was jammed with the slide locked in the back position, the report says.

During the investigation, it was determined that Wilson, who was wearing an Outlaws motorcycle club vest, is a convicted felon and didn’t have a concealed weapons permit. He appeared to be intoxicated, was slurring his words and smelled of alcohol. And after being read his rights, he refused to speak with the deputy, the report says.

Wilson was transported to the Marion County Jail and charged with aggravated battery with a deadly weapon or firearm, using a firearm under the influence of alcohol, firing a weapon in public, possession of a weapon or ammunition by a convicted United States felon, displaying a firearm during a felony and carrying an unlicensed concealed firearm. He is due in a Marion County courtroom on May 21 at 9 a.m. to answer to the six charges.