Bonn, Germany (April 26, 2019) BTN — At the North Cemetery in Bonn, around 300 members of the Hells Angels have gathered to bury a man from their own ranks. About 70 came on motorcycles, the police shows presence around the cemetery.

The memorial service lasted for about an hour on a grassy area outside the cemetery. Two daughters of the deceased held funeral speeches in front of the assembled rockers and emphasized that their father had not been "a criminal" or "thug", but had spent his entire life doing honest work. At 4 pm the Hells Angels started their journey home in small groups. According to police, there were no incidents. 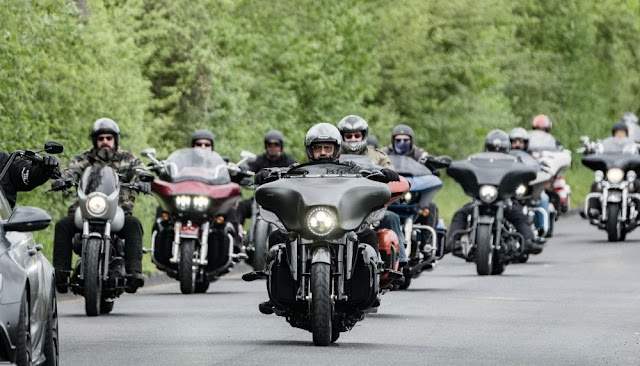 The late 58-year-old was a full member of the Hells Angels, confirmed Frank Hanebuth, longtime boss of the Hanoverian charter of Rockergang General-Anzeiger. "He has been with us for about two years," says Hanebuth. "A reliable man with experience in the security industry." The dead man comes from the Bonn region; his family chose the Nordfriedhof for the urn burial.

There were mourners from all over Germany, some from the Netherlands and Great Britain. What the rocker has died, according to Hanebuth seems to be unclear. The results of the autopsy are still pending, said the Hells Angels president.


In Spain, Hanebuth and 45 others are charged with forming a criminal organization allegedly active in Mallorca. The rocker boss himself sat on the holiday island long in custody and is released after media reports on bail. According to charges, he faces 13 years imprisonment and a fine of 4.2 million euros.

The prosecutor Hanover is currently investigating on suspicion that Hanebuth in the spring of 2018 had been involved in a protection racket in Langenhagen. The victim was said to have been a workshop owner. Hanebuth denies the allegations.