Biker Trash Network: April 6-7, 2019 -- A bloody weekend for Bikers as two separate fights break out in two separate States leaving two dead and five injured as riding season gets underway in many areas. The first was in Killeen, Texas and the one ending in Indianapolis, Indiana resulted in two deaths.

Both stories are developing


Killeen, Texas (April 6, 2019) BTN — Two people are hospitalized after a shooting between two rival motorcycle clubs outside of a Killeen bar Saturday morning, according to a Killeen Police Department press release. One victim remains in serious condition at AdventHealth Central Texas, and another is in serious condition at a Baylor Scott and White hospital, according to the press release.

The Killeen Police Department responded to a call around 1:40 a.m. Saturday about a "large" fight on the road outside of MJ's Bar and Grill at 1310 S. Fort Hood Road. As officials were on their way to the scene, two people were shot during the fight, according to the press release.

Indianapolis, Indiana (April 7, 2019) BTN — Two people are dead and another three are injured after an early morning shooting on Indy’s near northeast side. Police referred to the location as a “motorcycle club hangout.” According to the Indianapolis Metro Police Department, the shooting occurred shortly after 1 a.m. in the 3600 block of Roosevelt Avenue at a brown brick building that has no name, but is a known hangout for motorcycle clubs. Police believe at least two or three different motorcycle clubs were inside the building at the time the shooting occurred. 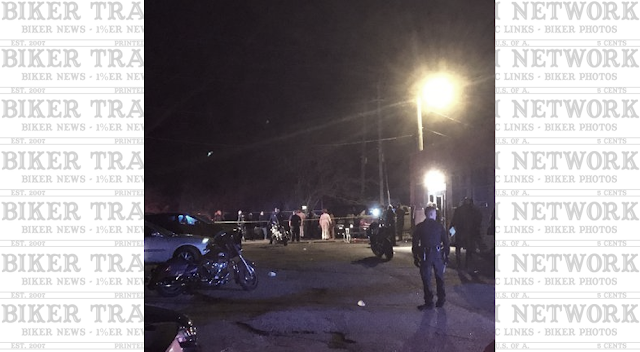 After police arrived on scene, they discovered one male and two females suffering from apparent gunshot wounds. One of the female victims was pronounced dead at the scene by Indianapolis EMS. The second female was transported to the hospital in serious but stable condition. The male victim was also transported, police said, but was pronounced dead at the hospital. According to police, two more victims that were suffering from gunshot wounds associated with the motorcycle club shooting later arrived at the hospital. One of them was listed as being in critical condition.


The severity of the fifth victim’s injury isn’t known at this time. Detectives with the Indianapolis Metro Police Department continue to investigate the shooting. IMPD stated a physical altercation may have lead up to the shooting, but they are still working to try and determine a motive. At least two IndyGo buses were loaded up with potential witnesses to be questioned by IMPD. The names of the deceased have not been released, as next of kin has not yet been notified.