Cornwall, Ontario – (April 12, 2019) BTN – The Cornwall Police Service (CPS) is striving to reduce the presence of motorcycle clubs locally by launching a “No Gang Colours, No Gang Clothing” program.

“As Cornwall experiences an increased presence of outlaw motorcycle gangs, it is important to send a clear message that the city is not ‘open for business’ to the activities of any criminal enterprises…(this) is a partnership between the police and participating businesses in an effort to stop outlaw motorcycle gangs from intimidating other patrons, and preventing future crimes from occurring on their property,” read a statement in a CPS press release. 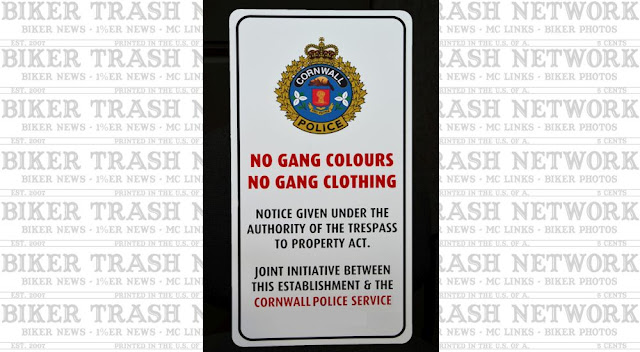 The CPS will supply signs to interested local businesses, which clearly state the “No Gang Colour, No Gang Clothing” policy is being enforced through the Trespass to Property Act. The CPS will have authority to enforce the Act for patrons violating the dress code by wearing gang colors or clothing where a sign is posted, in effort of fostering safer and more secure local environments.

“Drug trafficking, fraud, human trafficking, and contraband smuggling are all known to be criminal activities conducted by outlaw gangs, and we want to help our local business community ensure these activities are not occurring on their premises,” explained Det. S/Sgt. Robert Archambault, Criminal Investigations Division.


In March, the Ontario government announced an investment of $16.4 million over two years towards a Gun and Gang Support Unit, which will enhance major investigations and prosecutions, as well as province-wide intelligence gathering. The province also established a Gun and Gang Specialized Investigations Fund to support joint forces operations.

“In communities across Ontario and here in Stormont-Dundas-South Glengarry, our government is sending a clear signal that we support the work of the Cornwall Police Service and SDG OPP and community partners to fight back against gun crime and gangs that prey on our young people and put everyone’s safety at risk, ” said MPP Jim McDonell in a press release. “When we help protect at-risk young people, we create safer and stronger communities.”

“In June of 2018, the CPS assisted the Toronto Police Service Gun and Gang Task Force in a gun smuggling investigation, resulting in the seizure of 60 prohibited handguns,” said Stephanie MacRae, CPS Communications Coordinator. “The CPS will continue to work with all partnering agencies in order to assist in preventing these types of weapons from entering our community, in addition to countering organized crime and gang activity in the City of Cornwall.”

The government also announced that it will work with communities to establish justice centres across the province that move justice out of a traditional courtroom and into a community setting.