Toronto, ON (April 11, 2019) BTN — Police forces in Quebec arrested 33 people Wednesday in relation to an alleged drug network extending from Montreal to Outaouais, Centre-du-Québec, the Montérégie and more. A total of 37 searches were carried out, and police say nearly two kilograms of cocaine and 27,100 methamphetamine pills were seized as part of Operation Orca. 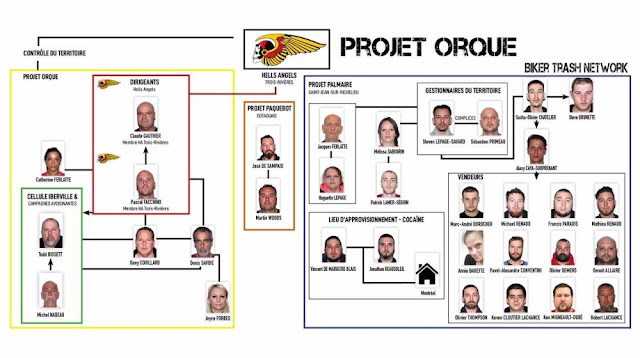 Officers say they also seized 23 vehicles, $120,000, four firearms, six jackets in the colours of the Hells Angels and an escutcheon. Two of those arrested were Claude Gauthier and Pascal Facchino, identified by authorities as part of the Angels’ Trois-Rivières chapter, alleged to be leaders in the sale of narcotics in the Saint-Jean-sur-Richelieu region.

Quebec provincial police‘s joint organized crime unit, known as ENCRO, is mandated to specifically target those in charge of organized crime rings. The squad consists of more than 160 police officers from the Sûreté du Québec as well as police departments from Montreal, Quebec City, Laval and Lévis.