Brighton, Michigan, USA (April 20, 2019) BTN — It's been seven years since the universal motorcycle helmet law was repealed in Michigan and the debate between whether riders should wear a helmet or have the choice to wear a helmet is still going strong.

Channel 6 News got the chance to go to the Forbidden Wheels Motorcycle Clubhouse in Brighton. One member named Jerry Jaskloski, also known as 'Jitterbug' has been riding since he was 16 years old and rode for only three years with no helmet law. "Just about turning nineteen the helmet law came on," said Jaskloski. 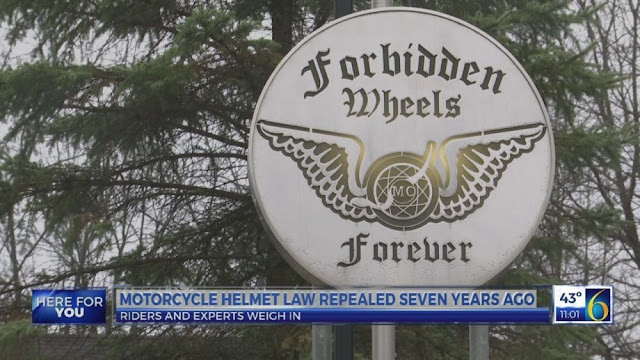 For most of his years riding, the law was in place, until April of 2012, when the law was repealed and riders had the choice to wear or not wear a helmet. Jaskloski says he was used to wearing his helmet when the law changed but over time, he slowly stopped wearing it. He added that when it hails, rains, etc., is usually the only time when he wears it.

Another rider, Russell Cockerham, says whether it's rain or shine, it's his decision to wear it or not wear it. "I was happy it got passed, not because I'm going to stop wearing my helmet, I'm happy I got my choice," said Cockerham.

According to study done by the Center for Management of Information for Safe and Sustainable Transportation, the percentage of riders who were wearing a helmet while involved in an accident dropped from 97.7 percent in 2011, to 68.8 percent in 2017. It also showed the the number of motorcycle accidents isn't increasing, but the number of fatal motorcycle accidents are.


The study also compared the number of accidents before and after the law was modified and how many of those were fatal.