Portland, OR (April 12, 2019) BTN – The star government witness in the torture-style killing of a former Gypsy Joker Motorcycle Club member is the man who wielded the fatal blow with a baseball bat strike to the head, a defense lawyer said in court Thursday.

The prosecution’s case largely rests on the words of the actual murderer, Tiler Evan Pribbernow, who has cooperated with the government, said attorney Matthew Schindler, who represents one of the co-defendants in the case. 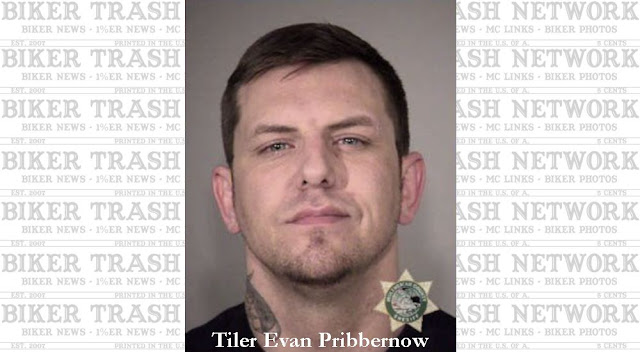 Schindler called it “outrageous” that prosecutors would allow Pribbernow to plead guilty to only racketeering to leverage his testimony against others. The deal allows Pribbernow to avoid accountability for the killing and save his own life by avoiding a potential death sentence, the lawyer said.

“Tiler Pribbernow did it because he’s a lunatic. That’s why,” Schindler said. “We’ve seen one witness statement, and that statement is the statement of the murderer. … He killed this guy.”

Racketeering, kidnapping and murder charges are pending against five others in the 2015 death of Robert “Bagger” Huggins, 56. Loggers found his battered body dumped in a Clark County field. He had a fractured skull, a broken rib, a broken leg, a removed nipple, nails driven through his boots, slash wounds to his back and face and many blows to his face, authorities said.

Schindler was arguing for the pretrial release of his client, Ryan Anthony Negrinelli, now 36. At the time of the killing, Negrinelli was a “prospect’’ to join the club. After the killing, he became a full member who went by the nickname “Striker” before splitting from the club in mid-2018, a prosecutor said.

Schindler said the government has no physical evidence placing Negrinelli at the scene. Negrinelli has no prior criminal record, he said. The lawyer also pointed to Negrinelli’s full custody of his 14-year-old daughter and ties to the community. U.S. District Judge Robert E. Jones ordered Negrinelli to remain in custody, citing the gravity of the alleged offense. But the judge said he wasn’t willing to let the defendants languish in county jail indefinitely while waiting for “some bureaucrat’’ at the U.S. Department of Justice in Washington, D.C., to “make up their mind” and decide whether to pursue the death penalty in the case.

He said he was told it could take up to a year for the decision, and that’s not acceptable. Schindler also urged the judge to discount Negrinelli’s statement to two Portland detectives after his arrest, saying it should be suppressed because the detectives failed to acknowledge Negrinelli’s repeated requests for a lawyer, placed him in a holding cell for eight hours without food and then plied him with leading information about the attack. Negrinelli also told the detectives he suffered from a childhood brain injury that impairs his memory.

The judge said he’d rule on a motion to suppress any statements at a later date.

Assistant U.S. Attorney Leah Bolstad said Negrinelli was involved in a “premeditated, planned hunt of someone who angered the group he was part of.” According to Pribbernow, Portland’s Gypsy Jokers president Mark Leroy Dencklau ordered the attack on Huggins and others helped. The June 30, 2015, kidnapping and subsequent killing was in retaliation for Huggins’ burglary and robbery at Dencklau’s Woodburn home earlier that month, the government alleges. Dencklau is also charged in the killing.


Huggins had targeted Dencklau’s home after getting kicked out of the club for stealing and breaking club rules, Bolstad said. Dencklau’s then-girlfriend was tied up and Huggins stole some of Dencklau’s property, including guns, the prosecutor said.

While Pribbernow is a key witness and has implicated co-defendants, he’s not the only witness, Bolstad said. Information Pribbernow shared with investigators has been corroborated, including use of a Chevy Tahoe by some of the defendants to carry Huggins’ body and dump him in Ridgefield, Wash., she said. DNA from blood found under carpet in the trunk of the Tahoe matched that of Huggins, she said.

According to Bolstad, Negrinelli helped grabbed Huggins in the driveway of a Portland home and put him into an SUV, where he and four others beat him and drove him to a shed in Woodlawn, Wash. Negrinelli helped place Huggins in the shed, where the defendants continued to torture Huggins, according to Bolstad. In his own words, Negrinelli told Portland detectives after his arrest that he “blasted,’’ or punched, Huggins a few times, Bolstad said.

Negrinelli also used water-boarding on Huggins, placing a scarf over his mouth and pouring water into it, triggering a choking response, Bolstad said. He also helped apply burning hot wire to Huggins’ body, she said. While others dumped Huggins’ body, Negrinelli and two co-defendants drove away in another car to discard weapons, throwing baseball bats into brush off the side of a road, Bolstad said.

Kenneth Earl Hause, the national president of the Gypsy Jokers Outlaw Motorcycle Club, is the only one of the defendants who has was released from jail this year to home detention with electric monitoring as he awaits trial. Hause’s circumstances are different, Bolstad argued, because Hause is charged only in the alleged racketeering conspiracy and not with murder.