The Hells Angels have left the building

New York, NY (April 16, 2019) BTN — Since 1968, 77 East Third Street in Manhattan's East Village housed the Hells Angels Motorcycle Club's New York City clubhouse and apartments for some of its members. But the building was recently sold and the Angels have purchased new digs, a former church on Long Island. 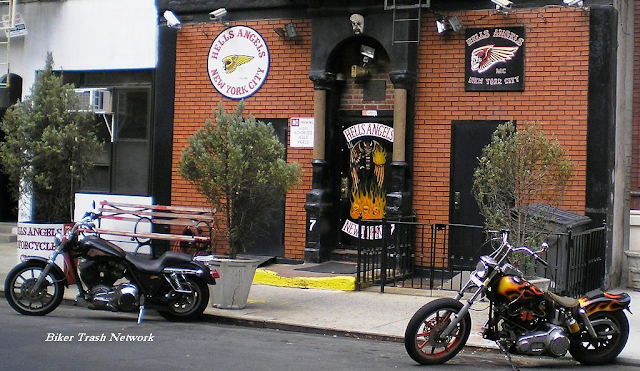 The New Yorker's Sarah Larson stopped by on moving day and wrote the article below.

On a drizzly Sunday at the end of March, a white-and-yellow moving van occupied a space in front of 77 East Third Street that had long been reserved—and carefully delineated with traffic cones—for gleaming Harley-Davidson choppers. From August, 1969, until that day, the six-story lightly gargoyled Renaissance Revival apartment building with a first-floor brick façade was the New York City headquarters of the Hells Angels Motorcycle Club. Its distinctive front door, between two Doric columns painted with sevens, depicted a motorcycle-helmeted skeleton gleefully wielding a pitchfork atop a bed of flaming skulls.

A plaque read “in memory of big vinny 1948-1979: ‘when in doubt, knock ’em out.’ ” That day, the Post’s front-page headline was “hell freezes over: yuppies bounce snowflake bikers out of east village.” After fifty years, the Hells Angels were moving out. 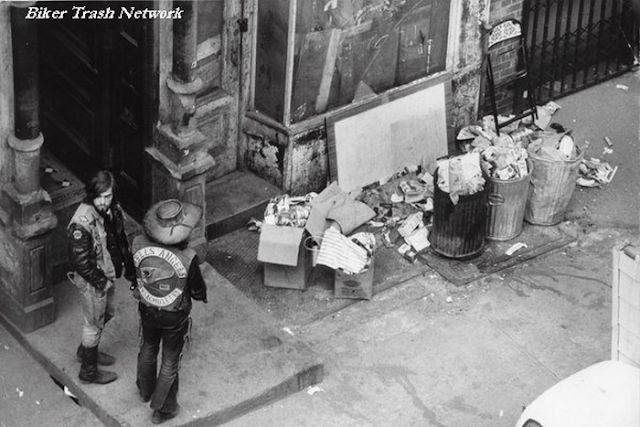 Hells Angels near their New York clubhouse on East Third Street between First and Second Avenue in March 1971.

The building had functioned as both clubhouse and Angels-only apartment complex. Its buyer, Nathan Blatter, of Whitestone Realty Group, has been approached by someone who wants to open a Hells Angels museum there, but he is not interested. “It’s going to be a regular apartment building,” he said. That day, several brawny men in vests that said “prospect”—a club membership level between “hang-around” and “full patch”—did the heavy lifting from No. 77 to the van: a metal shelving unit, shipping containers, a stray broom. The club had been moving out piecemeal. Its infamous park-style sidewalk bench, tempting to look at but dangerous for civilians to sit on, was gone.


Earlier in the month, a student from the Conservatory of Dramatic Arts, next door, saw members moving boxes out of the basement; another neighbor reported seeing the emergence of “motorcycle stuff and other unmentionable paraphernalia.” He warned an onlooker to stay away. “It’s like a skunk—you touch it and you start to stink,” he said, and hurried off. Other neighbors, though wary of being identified, were more wistful. At a dive bar, two veterans of the eighties post-punk scene—call them Nancy and Janet—reminisced over a glass of house red, with ice cubes.


“I’m going to miss the sound of their motorcycles,” Janet said. She moved to the East Village in 1980. “They’d have big Fourth of July parties. We’d go up to my roof and the fireworks would come right up to your face.” The Angels launched their fireworks from metal garbage cans. (A local illustrator described this as “absolutely terrifying.”) “The parties used to be great,” Nancy said. “Until the explosion.” In 1990, a garbage-can firecracker killed a fourteen-year-old boy. 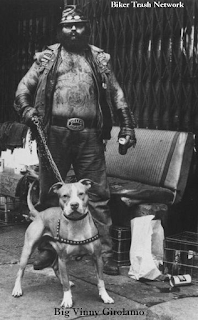 In 1978, the chapter president, Vincent (Big Vinny) Girolamo, of plaque fame, allegedly pushed his girlfriend off the roof, to her death. (He died, of stab wounds, before he could stand trial.) Innumerable bad vibes were doled out after unwanted bench-sitting, dog-peeing, and photography incidents. But, from the scuzz era to the N.Y.U.-and-condos era, club members also defended their neighbors; the Angels’ block was considered the safest around.

“I’ll miss the way they decorated at Christmas,” Nancy said. “They used to break people’s cameras,” Janet said. In the Instagram age, unwanted photography had skyrocketed.

The group is aggressively private. Only members were allowed inside the clubhouse—but Janet, decades ago, was invited in after a peppery conversation with an Angel. “I was scared shitless and trying to be tough,” she said. The interior, she recalled, “was like a suburban house”—couches and so on. “The women were cleaning and the men were partying.


Where were the Angels going? “I don’t know yet,” a prospect said. “Goin’ somewhere!” Would they miss the East Village? A wary, noncommittal nod. When the van was almost full, the Angels packed one final item: a Harley-Davidson motorcycle, eased onto a truck lift, raised up, and strapped in. A ponytailed Angel picked up a little girl, hoisted her onto his shoulders in front of the Big Vinny sign, and, smiling, posed for a picture. After some inter-Angel hugs and back pats, the men drove away. By the next afternoon, the plaques, signs, and flaming skulls were gone. ♦