Vancouver, B.C. (April 6, 2019) BTN — About 80 Hells Angels and associates gathered at the bikers East End clubhouse Saturday morning for their annual ride to pay tribute to fallen comrade Dave (Screwy) Swartz. Specialized police officers, who investigate so called motorcycle clubs, were also on hand to take photographs and videos as the riders arrived. 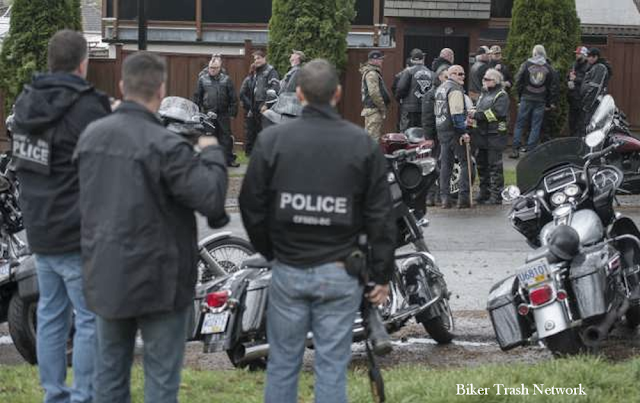 Vancouver police traffic enforcement officers checked vehicle registrations of several Hells Angels, prompting East End chapter president John Bryce to head out to talk to police. Some of the bikers muttered insults at officers, who were stationed across from the clubhouse, located at 3598 East Georgia St. VPD Sgt. Jason Robillard said police were out in force “to monitor and ensure that the rules of the road are followed.” “Public safety remains our top priority,” Robillard said.

Swartz was a full-patch member of the East End chapter when he was gunned down in Surrey on April 6,1988, by a friend after an all-night drinking party. The friend then killed himself with the same gun. Swartz’s son is now a member of the Vancouver chapter of the notorious biker gang. The Hells Angels were joined Saturday by “support clubs” from around B.C., including the Langford Savages, the Dirty Bikers, the Jesters, the Teamsters’ Horsemen, the Shadow Club and the Devil’s Army out of Campbell River. 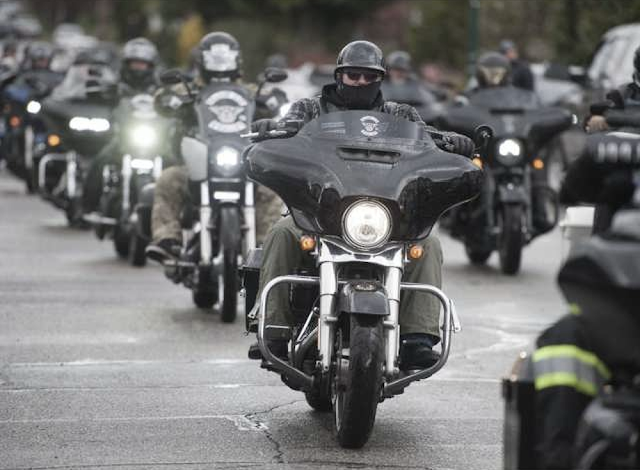 
The East End clubhouse, assessed this year as being worth $1,275,000, is one of three that the B.C. director of civil forfeiture is fighting in court to seize because of alleged links to criminal activity. Just this week, lawyers for the Hells Angels were in B.C. Supreme Court arguing the director’s lawsuit, first launched in November 2007, should be thrown out. The Hells Angels’ latest petition alleges the RCMP violated the constitutional rights of the bikers by passing on information to the B.C. government’s civil forfeiture office.

And it also says the section of the B.C. Civil Forfeiture Act that allows information sharing with police violates the Charter of Rights and Freedoms. “The director therefore has no lawful authority to collect information from the RCMP. As such he had no authority to initiate proceedings on the basis of such information,” the HA’s petition states. “In the circumstances, the petitioners seek orders quashing the decisions to initiate proceedings and prohibit the director from continuing, commencing or conducting proceedings on the basis of such information.” The director says in his response to the petition that it is merely a delay tactic and that the bikers have known about the sharing of police information since at least 2008.


The Hells Angels “could and should have brought this judicial review at least 11 years ago,” the court document says, adding the bikers have “offered no explanation for its extraordinary delay in seeking this relief.” The director also said it did not receive any “personal information” about the Hells Angels from the police. A lawyer representing the RCMP also argued before Justice Barry Davies Friday that Canada’s national police force had the power to share information with the director of civil forfeiture. Sitting in court was Hells Angels spokesman Rick Ciarniello, who spent part of the morning filing his fingernails.

The trial, which began last April but has been adjourned several times since, is scheduled to last another three weeks. So far, the government side has called a former Hells Angel and a police agent who infiltrated the East End Hells Angels, as well as a series of police officers. Last month, parts of an expert report by retired Ontario Provincial Police Det. Staff Sgt. Len Isnor were ruled inadmissible because Davies said they were full of biased, unsubstantiated claims about the biker club.