Everett, MA, USA (April 22, 2019) BTN — A nighttime raid on the Pagan's Motorcycle Club in Everett ended with three men arrested — and two arraigned Monday on weapons charges, according to authorities.

A tactical squad of state troopers burst into a suspected Pagan's Motorcycle Clubhouse on Orient Avenue in Everett around 10:15 p.m. Friday, according to Middlesex District Attorney Marian Ryan’s office.

As the staties — including the State Police Special Tactical Operations Team — entered, they identified about a dozen Pagan's Motorcycle Club members wearing their club affiliation patches and other insignia, as well as several other people hanging out there, the DA said. 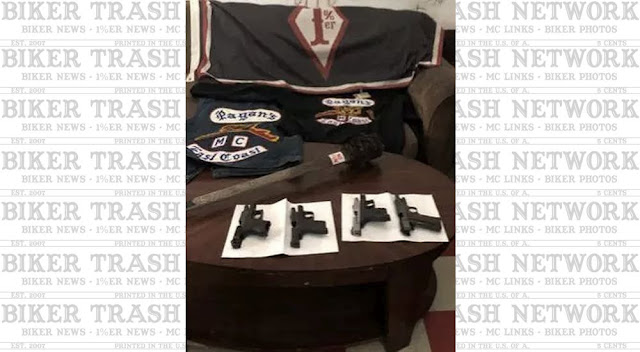 Cops say a search of the building turned up an illegal cash bar — and four illegally possessed semi-automatic handguns with loaded magazines, as well as another magazine containing ammunition.

Wentworth and Snow are due back in court on May 21.

The cops also arrested Marcus Basiliere, 26, of Derry, N.H., on an open larceny warrant from the Granite state for larceny. Basiliere was arraigned in Malden District Court as a fugitive from justice. The judge ordered him held without bail pending extradition to his home state. His next court date is May 1.

The Pagan's Motorcycle Club — also known as PMC or simply the Pagan's — is an East Coast motorcycle club that’s been around since 1959, according to various media reports, which have cited cops as saying that the club can be violent. The investigation remains ongoing.