Prince Edward Island, Canada (April 14, 2019) BTN – Island RCMP and Charlottetown police are on high alert this weekend with Hells Angels members from across the country in P.E.I.

There was a heavy presence of Hells Angels members, as well as several other motorcycle clubs, at a “celebration of life” for fisherman Ian Roulston Kennedy in Three Rivers Saturday. Kennedy was a full-patch member of the Hells Angels.

Cook said RCMP estimates there were 75 Hells Angels on the Island in total, from every province in Canada. He said due to the history of some Hells Angels members, a law enforcement presence is necessary anytime the club meets in P.E.I.

“As much as I’m sure the Hells Angels didn’t want to see us around, we’re here to protect the public and when they come into a community, because of their reputation, because of their history, they make that place unsafe and we’re not going to let that happen here,” he said. “So they can expect to see us each and every time they come here.” 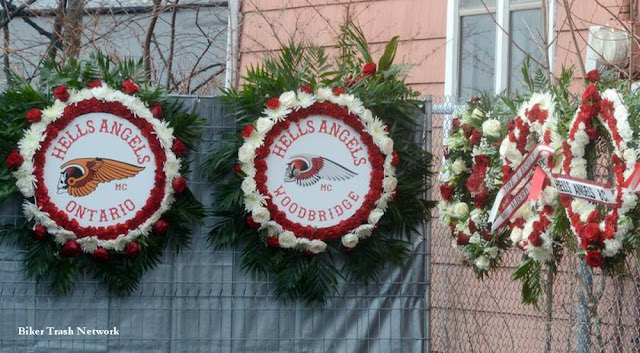 Cook said there was an incident at a bar in downtown Charlottetown Friday night. “Information was provided to me that someone did get punched by a Hells Angels member last night so certainly we’re worried about the violence,” he said, adding that club members typically do not stay in P.E.I. for long periods of time. “We don’t expect them to be here beyond the weekend.”

RCMP were unable to say whether Kennedy became a full-patch member of the club prior to his death, or posthumously. However, his love for motorcycles and the club was clear during the funeral, which was livestreamed on the Ferguson Logan Montague Funeral Home website.

During a eulogy, Mark Gauthier of Vicious Cycle Motorcycle Club, said Kennedy “completed the program of the biggest motorcycle club in the world, earning his spot amongst them all the while never complaining or expecting any special treatment because of his health.” “He wanted to earn his spot just the same as the guy beside him and that’s exactly what he did."

Gauthier described Kennedy as an adventurous man who fished through chemotherapy and whose memory will live on in the hearts of those he knew. “When we ride, Ian rides,” he said. “When we’re on the water, Ian is on the water.”