Tampa, Florida (April 19, 2019) BTN —  Sunday night, a car turned into the path of motorcyclist Mike Tapp on Dale Mabry Highway. To avoid a collision, the biker braked hard and lost control, throwing him and his passenger to the pavement.

The biker died and the passenger, his longtime girlfriend, was seriously injured. The driver of the car didn't stop and the Florida Highway Patrol is looking for the person who was behind the wheel. 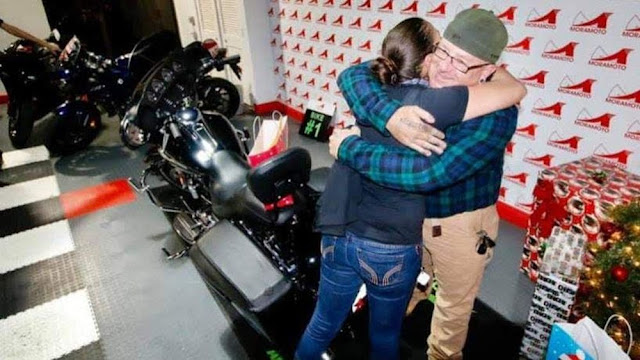 Mike Tapp, Boston Mike to his friends, hugs friend Gina Henry in December after buying the 2016 Harley Davidson Street Glide at left. Tapp, 49, was killed Sunday when a driver turned into his path while he was riding on Dale Mabry Highway. [Courtesy of Andrew Mora]

It's the kind of crash that would have angered Mike Tapp and spurred him to action.

A friend of the couple, Andrew Mora, is now offering a $2,000 reward for information leading to the identification of the driver. If Tapp were around, his friends say, he would light up Facebook with the reward offer, determined to do his part for members of his biker family. But the 49-year-old Tampa father was the motorcyclist killed in the crash, and his longtime partner, 46-year-old Kymberle Meade, is still in the hospital.

"He really was a pillar," said Mora, owner of Moramoto, the motorcycle dealership where Tapp bought the 2016 Harley-Davidson Street Glide he was riding Sunday. "If someone were in need, he would be the first to help."

Known as Boston Mike for his native city, Tapp had lived in Florida for many years. He and Meade had been together nearly three decades and had children together.

Tapp was a proud member of the American Outlaw Association, one of the biggest motorcycle clubs in the country, his friends said. Law enforcement considers the Outlaws a criminal gang, but Tapp was far from a menace to society, Mora said. For Tapp, the club was about camaraderie centered on a shared passion for riding.

When a friend needed a hand, Tapp would help spread the word, taking to Facebook and banging out public posts in all capital letters. Most days, he'd wake up early and send friends messages with irreverent memes and the latest news in the biker scene.

"He was the one of the funniest, most humble guys I've ever met," Mora said.

Tapp had worked a variety of jobs over the years, from fueling planes at a local airport to manning phones at corporate call centers, said friend Morley Henry, 35. Tapp and Meade often hosted cookouts where Tapp served up his signature chicken marsala.

"He was that personality who walks into a room and everything lights up," said Henry, a motorcycle technician at Moramoto. "It didn't matter was mood you were in, put a smile on your face. He went out of his way to make everybody happy."

In December, Tapp traded in his old Street Glide with 90,000 miles on the odometer and bought a 2016 model, Mora said. Within a couple of months, he put about 10,000 miles on that bike.

On the night of the crash, Tapp and Meade were riding north on Dale Mabry when the driver of a small, light-colored sedan heading south turned across their path to head east on West Idlewild Avenue, just north of Bill Currie Ford, according to the Florida Highway Patrol. Troopers released footage of the crash caught by a surveillance camera at the Volvo dealership across Dale Mabry, but the camera is too far way to determine the make and model of the car.

"You can see clearly the action of that car caused the crash even though they didn't collide," said Sgt. Steve Gaskins, a spokesman for the Highway Patrol.

It's unclear what, if anything, the driver would be charged with if identified, however. Troopers would have to confer with the Hillsborough State Attorney's Office, Gaskins said.

Mora said the driver should come forward. Otherwise, he's hoping his reward will provide an incentive to someone who knows something.

"We'll never have closure," Mora said, "so the only thing we can possibly have is justice."